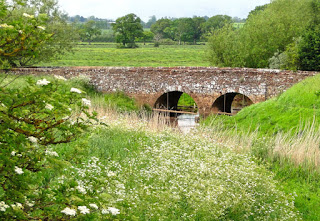 An oversight on my part for sure - I managed to forget to write this last week following on from my ACW collection post so apologies for the delay!

From Wednesday of last week SWMBO and I headed west to stay near our friends place just outside of Exeter. For a variety of reasons we did not get out and about very much other than the daily six minute drive from the b and b we were staying at to their house although a couple of walks with the family dog did take place. We stayed at small Devon village called Clyst St Mary and the significance of this is that there was not only a battle fought there but also a subsequent massacre in 1549 during the Prayer Book Rebellion. The whole area of the rebellion is within that locale and being Devon is still relatively untouched or developed although Exeter itself seems to be getting bigger.

Whilst I have not explored the area of the campaign, nor indeed the campaign itself, in any great detail (I have driven though or arond the area many times) it is something I would like to do in due course as it took place over a fairly compact area amongst some wonderful Devon countryside. Even the place names that featured in the Rebellion sound evocative and, well, country like: Fenny Bridges, Ottery St Mary, Clyst St Mary, Sampford Courtenay, Crediton and Woodbury Common - all solid rural sounding place names.

From a gaming perspective I recall a number of years ago my old friend Chris Hardman et al were involved in running a game based on the rebellion with the royal army consisting of Italian Arquebusiers, Landschneckts and German troops against bluff and hearty Cornish and Devon yeoman featuring longbows and bills etc. I will have to ask Chris about the game as it was a while ago.

I discovered, after some trawling of the net, that an article by Andy Callan appeared in Miniature Wargames Number 13 and featured a solo campaign game for the rebellion and this was used to very good effect on the following blog: Heretical Gaming written by JWH.

As an aside the other rebellion from the same year - that of Robert Kett in Norfolk - also has a personal connection in hat my sister in law and her family live walking distance from the rebel camp at Mousehold Heath near Norwich. 1549 was a busy year on the rebellion front!

Work will resume on the 30mm ACW collection this evening and I am aiming to have the whole lot finished, photographed and blogged over the course of next weekend. When this is done I will need to think about the accompanying naval elements but I have a couple of plans in mind for this - more of which later.
Posted by David Crook at 08:54

Impressed how you manage to jump centuries very quickly - I didn't see the ACW coming up on your radar ;)

Meanwhile I am getting round to starting a sample of the 28mm Malburians .. eventually!

The ACW has been lurking in the background for what seems like centuries. Trust me, my spin on it will work well in an old school portable wargame kind of way....

Good to see about the Marlburians - what is the master plan then?

I may be jumping about from 15mm to 28mm because of a Malburian project in the offing from an "unstructured group" musing what to do ... winter is coming so there should be plenty of opportunities to paint ;)

Funny how things stick in the mind - having read your post I was sure there was an article in one of the vintage mags about Ketts Rebellion, too.
And I found it - by Robin Jenkins, Wargames Illustrated no.s 6 and 7. More a staight historical account I think, than Andy Callan's scenario/campaign guide.
So why can I remember that from 30 years back, but not paying the water bill from last week?

History at every corner in Britain... :o)

PS. I recommend the Sansom "Shardlake" novel "Tombland" for an absolutely brilliant fictional depiction of Kett

I am really curious to see where your thoughts are heading with the Marlburians and for sure, you will have plenty of choice and time to work on them over the winter months.

For my own part I shall be getting some ACW games in and scratch building ships to go with them!

If you have copies of either magazine and could scan me the relevant pages I would be very grateful! I am not planning on gaming either anytime soon but it would be good to see what was in the magazines.

I know what you mean about the memory! I can remember details f games I have played from 30 odd years ago but not what I had for dinner last Wednesday evening (actually I can but only because it was our first night in Clyst St Mary....)!

I remember reading the excellent review on your blog and made a mental note to get a copy. It is my birthday later in the month and I am expecting a couple of Amazon gift cards so may well be getting a copy then!