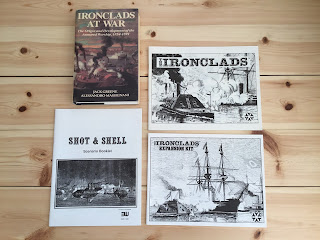 For a variety of domestic reasons the posts have been a little on the sparse side and this will, unfortunately, be the pattern of things for a while. I am OK but we have a situation that requires rather a lot of my time at present - as well as being back at work albeit on a part time basis. 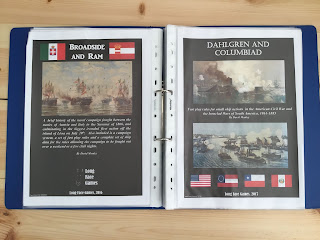 Although I have not been able to do very much on the gaming front I have made a few inroads into preparing for the naval side of the ACW project as well as for the War of the Pacific. Aside from the material available from Yaquinto’s Ironclads and the Ironclads Expansion kit, together with 3W’s Shot and Shell there is also the material available from David Manley for the period. At this very formative stage I plan to use the counters and map boards from the board games with a ‘hexed’ version of David Manley’s rules. There is also the rather pleasant option of using Bob Cordery’s Gridded Naval Wargames and the tweaked variant prepared by the redoubtable Mr Fox.

The boardgames have some very useful ship data cards that, amongst other things, shows the location of the ships weaponry which will be handy should I decide to get scratch-building again - which is something I am keen to do, failing that good old Peter Pig will supply the ACW ships from their Hammerin’ Iron range. 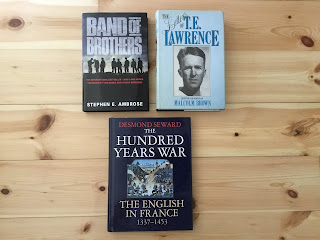 A very pleasing haul - all hardback and in great condition and costing a mere 50p each!

Following the continual easing of restrictions over recent weeks I am pleased to report that the boot sales are once again back in operation and out particular favourite is no exception. It was all very well organised with single rows of sellers and a one way system - mostly observed but with a few anti-social types pointing out about their ‘ooman rates’ - and between SWMBO, my daughter and I we managed to get quite a respectable haul each.

I was pleased to get the three titles above for quite different reasons. Band of Brothers needs little introduction and whilst I have seen the TV series have not read the book that accompanied it. The Letters of T.E. Lawrence will go into my modest but pretty good collection of books about the man himself. Finally, I have been after a copy in hardback of Desmond Seward’s history of the Hundred Years War for some time, mainly because I rather like the idea of some Lion Rampant style games using solely Perry Plastics or even some cheapo toy Hollywood style medieval figures.

Not a bad haul for sure and against the backdrop of the ongoing domestic situation a most welcome distraction!

Band of Brothers is a great read.

I love the strong smell of naval games in the morning!

It is one of those books that has been on my ‘to get’ list for a while so I was very pleased at getting the hardback version in such good condition for 50p!

I am looking forward to this - mainly because it will not take a lot of setting up - and I plan to tackle some models for it at some point.

Some great bargains you got there. We are still awaiting 'release' due to our son being on the extremely clinically vulnerable list, so no car boots etc until 1st August at the earliest.

I am sorry to hear about your son and with everything that is going on caution is very much the order of the day! August will come around quickly enough so you will be able to head out and about.

I was very pleased wit the three books (and the price!) and so it made it all worthwhile.