Preparing for The War of the Pacific

I mentioned in my last post about my plan to raise some forces for the War of the Pacific 1879 to 1884 using Spencer Smith 30mm ACW figures so I thought I would expand upon the basic idea. To be honest it was (and indeed still is) a war about which I knew very little other than a smattering of tit-bits about the naval side. I have come to this point along a varied route and it really began when I picked up a copy of the above book. 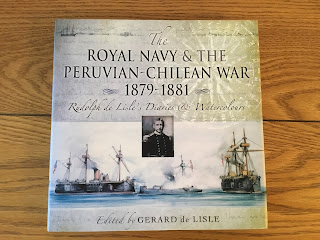 An absolute peach of a book and is full of contemporary flavour and atmosphere.

This is a peach of a book featuring as it does the diaries of a Royal Navy officer who was also had that typically Victorian hobby of watercolour painting. The pictures are quite charming and whilst they focus on the naval side there are some scenic views as well as of the various land forces. The book also contains a potted history of the naval war featuring the famous ironclad Huascar. 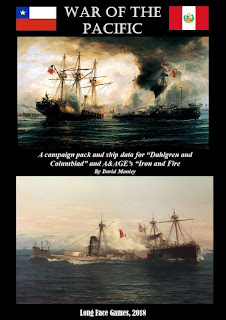 Lots of good stuff in here - ship specs, scenarios, campaign rules, maps and general information about this facet of the war.

Initially I planned to tackle the naval side using Tumbling Dice 1:2400th models but the project was abandoned. It would however, make an ideal mini campaign and indeed, David Manley has produced a very useful campaign pack in support of his Dahlgren and Columbiad naval rules for the ACW. This is available from the Wargames Vault as part of his Long Face Games label and is called War of the Pacific. Dahlgren and Colombiad are designed with smaller actions in mind so suit the South American wars very nicely.

The original versions of Yaquinto’s Ironclads and the Expansion Set. The rules are very detailed and ‘chart heavy’ (typical 1980s) but there is a wealth of useful information contained therein and of course, the all important ship counters. Shot and Shell by 3W Games added to the above and addressed the problem of firing large numbers of the same calibre guns.

The Ironclad Expansion Kit also includes the ships for the War of the Pacific so when I choose to fight this I will have the naval dimension covered, albeit using cardboard counters! I should also mention that David Manley’s Scenario pack featured above also includes a selection of ship counters that could be printed off, mounted on card and used in lieu of models. I would use models eventually but for now counters will have to do. 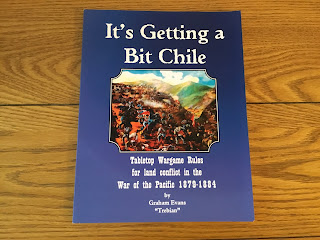 These are a really well thought out and properly play tested set of rules with a lot of useful information about the armies, uniforms, organisations and more contained therein.

The biggest jolt for me concerning this war was when Trebian published his set of rules for the period called ‘It’s Getting a Bit Chile’. Aside from the title of the rules which appealed to my sense of humour - you should see some of his other rule titles - this has been something of a revelation to me about the period. There is not a huge amount of material available on the war in English but Trebian has done a sterling job in distilling it into the confines of his book. The scale of the combats is such that one would not need a vast amount of material to enjoy a good and representative game. For me this is something that ticks an awful lot of boxes! It also falls rather nicely into Portable Wargame territory which is a further bonus and even The Men Who Would be Kings. 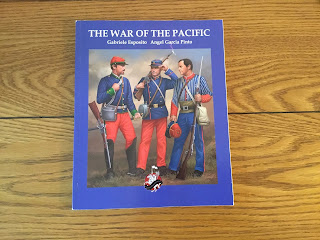 With uniforms straight out of imagi-nations territory the look of the armies is colourful and easy enough to replicate using proxy figures. There are some dedicated ranges of figures available but for me the basic ACW cut of most the uniforms (excepting the Picklehaube wearing infantry unit and the helmeted cavalry) means one thing - Spencer Smith

When confronted with a potential new period the first thing one tends to do is to see what books are available - either about the campaigns and battles or the organisation and uniforms of the combatants. There is now the inevitable Osprey title for the war (I do not have a copy of this as yet) but what I did find was the title above. This is a peach of a book and the uniforms of the combatants for the most part can be produced by the simple expedient of paint conversions of pretty much anything wearing a kepi. Whilst not a perfect match the Spencer Smith range are well suited to paint conversions which will suit most uniforms. Naturally there are exceptions to this but I will fall off that particular bridge when I get to it!

I have sufficient figures to field two small forces Each consisting of 4 x 12 figures infantry units, 2 x 4 figures cavalry units (with dismounts) 2 x guns and crew and the inevitable command etc. These will be based individually and use with Trebian’s rules I will need to use movement trays. I plan to paint the figures in an old school gloss varnished style inspired by the work of Old Painter Bob.

It is a project of pure indulgence and the plan is to make a start once the last the ACW Spencer Smiths are completed and the paint conversions for the Del Prado collection. I am now not going to be rebasing this but I will be reorganising it and as a result there will be some excess figures to dispose of.

That is the plan - let’s hope I can stick to it!

I have the three armies in 10mm, the Pacific War gets quite addictive! There is a great hardback book on the uniforms available. Think it’s published by Caliver.

That book by de Lisle is a corker!

I rather like the idea of 10mm as a scale but have yet to do anything with it. Oddly enough I have been looking at it for other things.

The addictive effect of the Pacific War has already been suggested to me by Trebian....:-)

I will take a look at Caliver Books and see what I can find.

Absolutely! I really like the watercolours in it - very atmospheric.

All the best and thanks for the inspiration!

A great project and the naval side is fascinating. There's a set of files for some of the ships in 1/1000 scale available on Wargames Vault:

The more I read about it the more I want to make a start but I must be disciplined. In any event painting up the ACWs will be good practise.

I rather like the idea of larger ship models simply because one would not need many of them.

Something to think about them.

In Amazon you can find the book: "Uniforms of the Pacific War 1879-1884: The Land Campaigns" by Patricio Greve & Claudio Fernandez. A bit expensive (130 Euros), but ivaluable in information, specially with respect to campaign uniforms.