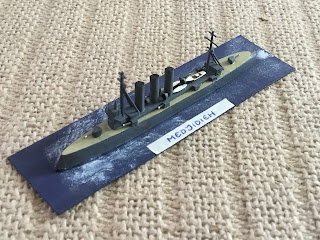 I know I have used this picture before but I am rather pleased with it! Incidentally, the guns for this were metal and as I recall Eric had a source for these. Needless to say these were used extensively!

It is funny how after some forty odd years I can still recall much of the fun associated with the WW1 South East Asia naval campaign that Eric Knowles devised and ran using Fletcher Pratt as the rules of choice - on a table top.

I will let that sink in a little.

The table we routinely used at Eric’s house to fight the games arising from the campaign was around 7ft by 5ft which, as any naval gamer with experience of using Fletcher Pratt rules will testify is way too small a playing area. Yet we used it and fought actions up to fleet sized. The result was glorious levels of close proximity carnage and the amount of shipping that was sunk would give any self respecting marine insurance broker sleepless nights! It was enormous fun though, albeit in an anarchic, cartoon kind of way.

I took the whole thing very seriously though with the ship building, order writing and the overall strategic situation - which after some spectacular Central Powers defeats was precarious for the Turks in the extreme.

The campaign fizzled out around about early 1915 as the ship losses for the Central Powers were so heavy that Eric was forced to keep adding ever more powerful and outlandish ships to the navies - which also included the Allies so we had the Bismarck and Tirpitz appearing at Christmas 1914 whilst the Royal Navy acquired the Ark Royal....

Even Eric’s legendary inventiveness and well developed sense of creativity struggled to keep up with demand so the campaign drifted off into the wargaming sunset.

I am looking forward to when Bill unveils the remaining fleets as there are some fantastic models still to be seen. I only hope that they have survived the interim period of storage in good order.

Fast forward to today and what do you do with a forty year old imagi-navy? It would be great to get some games in using elements of the forces available from way back when, even in 1:1200th. To be honest it would not bother me using models of this scale on the table top as most naval games are an exercise in abstraction anyway. Something grid based would work well and if the models look too close to one another it is not the end of the world. I can happily deploy a 6ft by 4ft playing area in the man cave and so as long I don’t think about running Jutland in that scale it could work. In many ways  it would be little different to using 1:1800th scale models as long as the number of models on the table was kept to a sensible level - certainly nothing like the tabletop traffic jams we used to get ‘back in the day’!

Some of the very best games we played during Eric’s campaign were using up to around half a dozen models or so a side and so I am thinking that even using a grid on a 6ft by 4ft this would be a good workable size to aim at.

Some time ago I acquired from Old Painter Bob a selection of 1:1200th WW2 assembled and painted ships as well as some still in kit form. I was wondering how best to use these and so tacking on the Turks (and Austrians) will give me some more variety and would form the basis of a interesting set up.

In truth I used to really enjoy messing about with plastic ship kits - not so much building them as per the box but using them as the basis for something else!

So aside from the rebasing of the Turks and the basing of the Austrians (I may touch up the paintwork on these) I have an easily organised mini project more or less good to go. It will certainly help to scratch my naval itch for sure.

I seem to remember that we used the Fletcher Pratt rules with the ranges expressed in cms rather than inches (e.g. 120 inches became 120cms ... which mean that it would fit onto a large tabletop).

We also used a slightly different damage system, whereby there was the standard erosion of ship capability by gunfire plus umpire’s assessment of actual hits. In other words, a shell hitting a turret would reduce the ship’s points value and might result in the destruction of the turret.

As most naval wargames are ‘hypothetical’ actions, I see nothing to stop people from creating imagi-navies, just as long as the ship designs are feasible.

Certainly the firing ranges worked well but the problem was more about the size of models and the numbers being used! I remember that in some cases certain ships were unable to move beyond the length of their hull in a single turn! In retrospect using smaller scale models would have worked far better - 1:3000th would have been really interesting - but it was enormous fun all the same.

You are absolutely right about ship feasibility and imagi-navies and Eric was able to satisfy both of these facets with his extensive knowledge of warships. The problem with the campaign which increased as time passed was that more and more ships were being sunk which meant that more ships needed drafting in to make good the losses.

Personally, and with the benefit of hindsight, if we had stuck to contemporary designs (up to when the campaign was set) it may have maintained the campaign for longer. This is being wise after the event though and should not in any way be viewed as a criticism!

Very nice. One of these days I'm going to succumb and buy some ships. It's almost inevitable...

The great thing with naval games is that they are very easy to set up. They are also heap by comparison with their land counterparts.

Go on, you know you want to - and Bob Cordery’s Gridded Naval Wargames are a great place to start, as is anything by David Manley.

Is was certainly that!