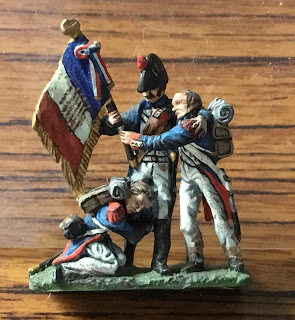 Large 25mm and painted quite superbly (although not by Eric) a vignette of the last stand of the Old Guard at Waterloo - possibly Hinchliffe?

Work has resumed in sorting out the Napoleonic collection of Eric Knowles and it is truly an undertaking! The collection had been partially disposed of whilst Eric was alive but their are plenty of remnants to sort through. We are not talking about complete armies, rather the rump, and it is a very untidy rump at that!

There is plenty of artillery and this means guns, crews and limber teams but all are mixed up. In true Eric tradition his crews are made up of figures from a variety of manufacturers and indeed, off various scales.

The cavalry is in shocking order with figures jumbled up, damaged in various ways and with units spread across several boxes.

There is a fair amount of infantry but how many Old Guard Grenadiers, British Guards in bearskins, 95th riflemen, Nassauers and Brunswick jägers can one readily use!

Having said all that there are a few gems that I have uncovered (currently being ‘transacted’) and it these that form the picture section of this post. 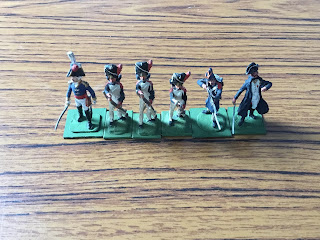 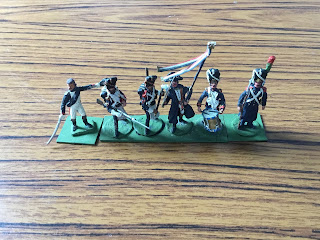 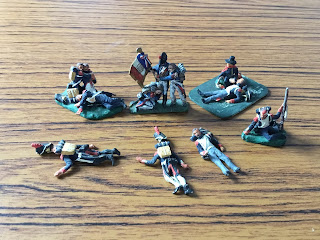 There may be a couple of other similar figures yet to be uncovered but this all looks very diorama like. I am not sure what would be the best way to tackle these in respect of the disposal thereof but they are certainly lovely to look at albeit of a rather somber subject matter.

They look very much like Minot figures maybe do yourself a nice vignette/ diorama to display the figures as they were meant to be.
I do not envy the challenge in sorting this out having done something similar when a friend died. It took me two years to dispose of everything,
Lots of memories though and some classic pieces

I must confess that this part of Eric’s collection has been by far and away the worst of the lot to sort out! These pieces are very nice though although lord alone knows what I will be able to do with them!

It has been two years so far but funnily enough after this batch there is an end in sight. There is Eric’s massive painted 20mm WW2 collection and the 1:1200th scale ships and rather a lot of terrain. That sounds a lot but trust me, after everything else it will be a walk in the park!

Since writing this post I came across a handful of 30mm British that look rather nice in a vignette sort of way.

I shall give this some thought.

All the best best,

Lovely figures David, the vignettes are Minot figures. I painted up a number for last years Waterloo game in Glasgow and handed them out to my opponents. They are lovely sculpts.

They are rather nice and I figured that Minot was the designer. They have a lot of ‘presence’ about them for sure.

I see a Grand Armee in the making

That would be something to see but I have a number of cunning plans on the go!