Of Boot Sales and the Largesse of Wargamers 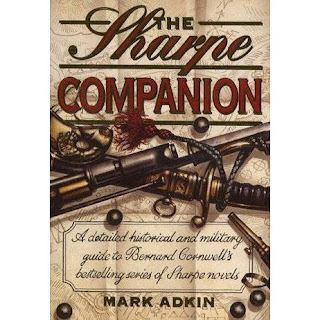 I scored a copy of this sometime ago but it went as part of one of my periodic reorganisations and I regretted it almost straightaway. Acquiring it for a second time for the princely sum of 50p (And in better condition!) means that hopefully I will not make the same mistake again!

It has been blisteringly hot in the house despite fans and open doors and windows! In order to cool down we have made a couple of trips out in an effort to get some fresh air and one of these trips was to our local boot sale. It is quite well organised now after a slightly shaky start, with a one way system in place and single row aisles, but still some people found the concept of social distancing or even going via the correct route challenging. There was not a great deal on offer that would interest me other than the above which I was pleased to be able to add, for the second time, to the library. It will come in handy to help contextualise the Sharpe novels - I have not read all of them, nor have I watched all the TV series - in their historical setting. One of the hinges it will also help to inspire will be the Peninsula side of the Del Prado collection although this will be primarily aimed at the 1812 and later period.

The largesse of the wargaming community is well known and I am fairly confident that many readers of this blog would have at some point in their gaming careers been both the recipient and the benefactor of such acts of generosity. For the most part these acts in my experience tend to be when a project has been long abandoned or else some immediate support is required for a particular undertaking. Sadly in some cases it can also arise due to ill health or even death - and these are both categories I have some first hand experiences with in respect of dealing with collections requiring disposal of as a result of either. 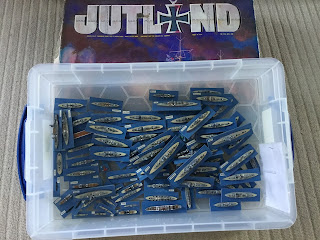 A wonderful box of nautical niceties! I will be reworking the bases and there are a couple of pieces of touching up to address but nothing major. The copy of Jutland by Avalon Hill is bringing up the rear.

I have just taken delivery of a partially complete copy of the Avalon Hill board game of Jutland as well as some very nicely painted WW1 1:3000th scale warships for the British and Germans. These arrived courtesy of a gamer who is currently ‘putting their affairs in order’ as the result of serious, indeed terminal, illness. The gentleman in question is the gaming friend of a friend of whom I had heard of but had never met nor even spoken with. I have now spoken with him and it was both a humbling and sobering experience. His passion for wargaming shone through and his hope is that his collections will continue to be enjoyed after he has gone to that great Wargames convention in the sky. He asked for no monies for these models - just a donation to charity (I know which one and it struck a chord with him so we were certainly on the same page in that respect!) of an affordable amount and such is the thoughtfulness of him that he is fully aware of the potentially trying financial circumstances that may be in play during the present time.

How do I feel about all this?

In truth I feel humble and yet in a sense deeply inspired. I only hope that when my time eventually rolls around that I will have a similar level of fortitude.

My grateful thanks are extended to him and so I hope that my gaming efforts with his collection will in due course honour his memory. 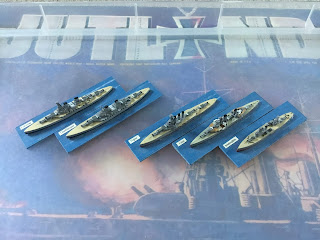 A selection of battle cruisers - for the Germans the notable absentee is S.M.S. Seydlitz

I will be sorting the collection out and at present it looks like a very good representation of most of the major classes of dreadnoughts possessed by the two navies during the Great War. There is a selection of cruisers and smaller stuff, destroyers and the like, as well as some merchantmen, monitors, seaplane tenders and even a few submarines. I would certainly look to add to the collection as the mood takes me but at this stage the only thing I need to do would be a rebase and some very minor touching up here and there. 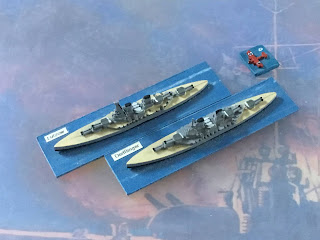 I had forgotten how good a scale 1:3000th is for naval gaming as my own navies of this size have long since gone - however, this has now been partially addressed.

My gratitude for this collection is immense and I will be posting a fuller fleet review once the temperature in the man cave has dropped at least 10 to 15 degrees!

I t must be a comfort to him to be able to pass on this collection to a good home .

I hope so - and it is certainly something I hope I will provide.

Salutary reading on one level in that it is something that will come to us or our families at some point, but hopefully not for sometime yet. Great that you have been able to give part of the collection a good home with a suitable donation to charity.

Another good find at the car boot sale, which for us still remains an off limits activity due to our family situation. I think it may be quite sometime before we feel safe to return to such things.

My wife and i finally got around to drafting our respective wills last year and provision for the disposal of my collection (which I insist is quite small but she says otherwise!) was a factor. Tackling this in advance of. The event would at least mean that one would be able to know that one’s work would be going to an appreciative home and with charity benefitting it is a win win all round.

Slim pickings at our local boot sale today but it only takes a single bargain to make it worthwhile!

How sad, but it must be a comfort knowing his ships are going to be well loved and played with.

That it is - and so it means that I need to ensure that the collection fights on (and it certainly will!).

Sobering, comforting .. and may we all meet up in that "great barracks in sky" .. if there is such a thing as heaven could it be like CoW?

If last year was anything to go by then I certainly hope so!

It is a journey we will all take at some point.