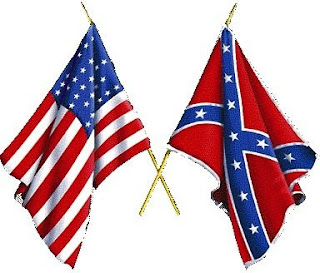 I know the Confederate Naval Ensign was different to the above but the picture is quite evocative.

As the current batch of four ships are currently ‘under the brush’ I thought it might be a good idea to list the ships of the collection and their names. I have opted for hypothetical names so any resemblance between them and anything historical is purely coincidental and not intentional! Having said that the models are very much ‘based upon’ actual historical types and their names/classes are in brackets.

C.S.S. O’Hara and Butler (pretty much any of the small to medium sized casemate ironclads with a single gun port fore and aft)

The Confederate fleet is far more fluid in respect of the inspiration for the models and I intentionally kept the casemate ironclad designs simple for ease of construction. I plan to add a small ironclad to the Confederate fleet but then it will be gunboats and converted merchant vessels including paddle driven types. The same will apply for the Union in respect of gunboats etc although I am toying with an obvious deep water type.

I have not read too much about the blue water naval operations of the civil war but I know there was a lot of activity so I am thinking that the old naval standby of ‘hunt the raider’ may be fun to do. Another alternative would be a Confederate attempt to get one of their newly European built ships back home.

I had even thought about building a 20,000 Leagues Under the Sea style Nautilus....

As ever plenty to think about!

Some great names there David and surely the O'Hara will have to be a scarlet colour and will the Captain of the Butler give a damn;)?

It is all part of the fun! I was tempted to use some names from the TV series Dallas for the Confederates, possibly with the Dukes of Hazard thrown in for good measure. Gone With the Wind seemed appropriate somehow and I am sure that Captain of the Butler will frankly give a damn!

I’m sure come the second wave of ships then The Dukes can make their appearance 😁
It’s all coming together really well and I’m looking forward to your first action.

David -
Nice names! I decided upon fictitious names for some of my more 'generic' ACW vessels. USS 'Watusi' was the name for the first ironclad gunboat I made - a sort of but inaccurate 'Cairo' class boat. My other 'Cairo' class boats, and the 'Benton' have been given historical names, as has CSS Tennessee. If you're looking for names for CSS riverine steamers, I find the Louisiana lakes and rivers a rich source of names: 'Atchafalaya', 'Pontchartrain' and 'Maurepas' are three of mine. I might one day build CSSs 'Yazoo', 'Big Black River' and 'Tombigbee' - rivers of other States.

Ever heard of 'Queen of the West'? Both sides had one. CSS 'Queen of the South' has a ring to it; and why stop at 'Queen'? 'Empress' and 'Princess' form untilled ground...

I have a long list of names to play around with so there is margin for the Dukes to make an appearance at some point!

Fingers crossed I am looking to try to get an action in later this week.

There is plenty of potential there for sure and thinking up names is great fun. I will also need to do this for commanders and place names for the map when I get to it but there s no harm in drawing some up now!