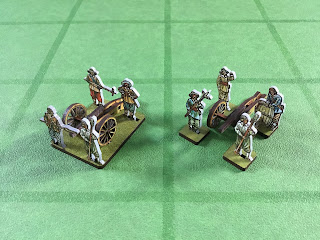 Before (left) and after. The guns are located on the base via two small lugs on the bottom of the wheels. These have now been removed. I can now deploy as many or as few gunners as I like around the piece which I think looks better - I am not a fan of huge artillery bases!

My brother and his family are feeling better albeit only marginally. This is better news for sure although it is early days so fingers are still being crossed.

It is probably not surprising that I have been less than enthusiastic about anything gaming related but I have managed a few quick wins which is always good for the soul.

I have been thinking about the 28mm ECW WoFun collection and have made a single change that may well be the thin end of the wedge in that it could possibly lead to fairly substantial variation.

I really do not like the artillery bases. They feel flimsy and do not like much in the way of movement - the gun comes out of its locating holes as do the gunners and so this has moved on from being a minor irritation to something requiring action. I have decided to base the gunners individually and leave the guns themselves off any kind of base. Since I will be mostly fighting my games on a grid this hardly matters and it is far more practical. 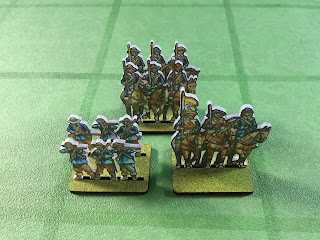 It got me looking at the infantry and cavalry bases, especially when I recently acquired a couple of dragoon regiments. At the present time all the infantry and cavalry figure strips are deployed two deep on a 40mm by 30mm base. The command strip for the two dragoon regiments is based on a single strip rather than the twin version. It occurred to me that using a single strip base rather than the twin version would have a number of practical advantages.

The main one would be to double the number of bases making up the units. This would mean that detachments could be modelled more effectively as well as unit formations. It would also enable me to tackle the assembly of the bases in a rather more permanent fashion - the picture below will help to explain my plan. 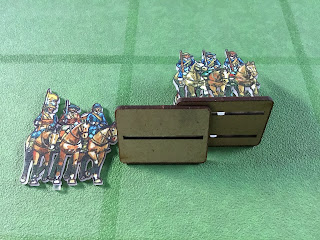 You can see the fixing lug on the figure strip in the left. The base on the right shows clearly how this works whilst the base in the centre is one of the 40mm by 30mm single strip bases.

For the most part the Wofun figure strips have a single small fixing lug that fits in to the slot in the base. The rest of the strips at least the ‘feet’ part effectively sit on fresh air as the slot is some 35mm long. Essentially the small lug is the only part of the strip holding it upright. It occurred to me that a slot of some 15mm would allow for the fixing lug (these are not always in the centre so 15mm covers the range of locations - centre or offset to the left or right) to be used but that also the ‘feet’ of the rest of the strip would be contact with the now ‘closed’ area of the base. This would a more permanent fixing solution could be used with the strips being glued into place. Warbases could do this readily enough although of course it does then mean that the bases would need painting/flocking.

It would not be a difficult task to tackle but it would be time consuming and of course their would be the cost to consider. I need to think carefully about this but it is certainly an option.

I prefer the new way if basing your artillery. It does look a lot better.

That is what I thought and I am glad I made the choice.

Hope your brother and family continue to improve.

I heard today that an old time gaming friend passed away last week due to covid-19. First person that I have known personally to have gone.

At first I thought you might be posting rules for the siege of Basing House!

But I see it's actually a play on words, an ECW wargamer's joke?

I agree with Ray. Your alternative way of basing also seems like a good idea.

I've been experimenting with my printer and have found I can reduce the figures to about 10-12mm tall to create smaller scale armies to fit the space I have available and be compatible with my scenery for my 10mm Napoleonics, yet still have a pleasing, colourful appearance.

David, the new artillery basing works better IMHO. Also I like the the single line basing as, as you know, it echoes the route I went with my mdf figures.

I am certainly pleased with the how the artillery worked out.

My bother and his family appear to be on the mend but it is a slow process so fingers are still crossed!

I am sorry to hear about your gaming friend - this virus is dreadful and the longer it goes on the more chance there is of someone closer to home falling victim.

Let us hope that the planned vaccines prove to be a step forward.

I was hoping that someone would point that out!

I am very happy with the artillery and am more and more convinced that the alternate basing idea may way be the way forward. I will give it some more thought.

I will be interested to see your printing experiments when they are ready.

I am thinking that it will be the way to go with the bases so best I get organising!

Pleased to hear the encouraging news of your brother and his family.

I was considering ordering WoFun Napoleonics. The more I looked into the basing of the figures, that turned me off. I feel WoFun's basing scheme is too limiting for me. For example, I want to try rules that use 4 figures in a line per battalion (They are Corps level rules). The bases are expensive compared to Litko Bases I used here in the States (Michigan). This is not meant to put down WoFun figures and the gamers that buy them. The figures are very nice and the price is reasonable.

Your family is in my prayers.

Just committed to buying some ancients but 17th century a definate possibility. Those Wofun figures are so cute!

Thank you old chap. They seem to be on the mend albeit slowly. It is early days but I think they are over the worst of it - and at its worst it was dreadful!

Thank you old chap - much appreciated. I understand what you say about the basing and indeed, I am considering my own collection going forwards. Mine is certainly liveable with even if it is not exactly how I would want it. For me the jury is still out as changing the bases of the collection would be a substantial undertaking - not difficult by any means but a lot of work all the same.

I would interested to know what corps level rules you are considering.

I was rather pleased with the title! Thanks for your good wishes - the family seem to have turned a corner but naturally it is early days yet so fingers etc are still crossed.

I looked at the Peter Dennis Roman collection and was very tempted but the budget would not run to it....yet....!