Union Monitors Along the Missenhitti River 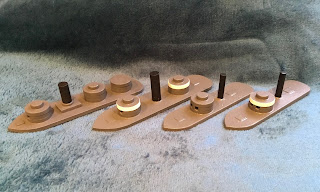 The four Union monitors sporting between them 7 turrets! To be honest there is not a great deal you can do with a monitor although I have seen some incredible paint jobs across the internet! I will be adding flags in due course and the turret bands are in fact white but came out cream looking under the lighting in the man cave. 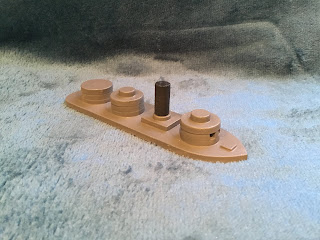 The U.S.S. Potomac on the lookout for Confederate ironclads

The use of Warbases for the laser cut hulls and turret pieces was definitely one of my better ideas and whilst I have intentionally made these models very simple, indeed toy-like, they have come out rather well. As mentioned I plan to build a further two models for this batch before moving on to the Colonial style gunboats etc for use with Madasahatta. The building techniques will be similar and I must confess that working ‘by eye’ rather than pursuing anything remotely close to scale is a hugely enjoyable and liberating experience!

They look splendid David. Are Warbases actually going to sell the bits you designed or was it just a one off for you?

Cheers old chap! It was a series of bespoke orders with them. I think for them to sell ship kits would need a little more design work than my efforts though! Initially what I wanted was some specific pieces that would be more accurately cut than anything I could manage but it has kind of grown from that. I will ask the question though.

I must say they look rather good and I can't help but love the simplicty of the monitors lines.

They have quite modern looking lines and I rather like them. There will be another Union model finished tomorrow.