News of the Crusades 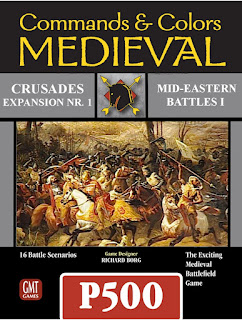 Oh yes indeedy! I am really excited about this expansion so hopefully I will not have too long to wait before it is available

Command and Colours: Medieval is the base game in what I suspect will be a large series covering the wars of the late Roman Empires up to the Renaissance period. I acquired a copy of the base game in anticipation of the expansions that would cover the periods that would be of most interest to me. This would be the period of the great Arab Conquests and of the Crusades in the Middle East as my primary interests and for the latter I have quietly amassed a good selection of reading material with the avowed intention of gaming it at some point.

There have a been a few Crusades near misses over the years in that I have looked at a few rule sets and even got as far as buying some as well as a selection of figures but thus far this has come to naught. What of Command and Colours Medieval then? Well, to be honest the period of the base game - the wars ‘twixt the Late Romans/Early Byzantines and the. Huns, Goths and Sassanid Persians - are interesting but it was not for them that I originally purchased the game. It was always acquired as the stepping stone onto other periods of greater interest for me. Having said that I have retroactively picked up some reading material about the period to round out my knowledge and to put the scenarios into some kind of context but it was always a kind of ‘take it or leave it’ interest. Unsurprisingly perhaps, the acquisition of some reading material has led me to develop rather more of an interest in the period than initially - such is the way I routinely get seduced into projects!

Chronologically one would have expected the first expansion to cover the period up to the Crusades so the early Arab Conquest and the rise of the Vikings etc would feature. This I would have really enjoyed but Richard Borg and the team at GMT Games have pulled a rabbit out of the hat in the shape of the first expansion being described as part 1 of the Crusades. The expansion is currently in what is known as P500 status meaning that once it gets to 500 advance orders then it goes to press. Take a look at the blurb from the GMT Games website and you will see what I mean.

I am really excited about this expansion as the Crusades are probably my favourite period from the medieval world (the Arab Conquests come a close second) and to have it ‘Command and Coloured’ is a great development. Best of all I still have a ton of Risk: Europe medieval figures (roughly 20mm and very generic looking) that could serve for the period with little difficulty. I am now rather pleased that I hung on to these as they had been earmarked for disposal!

All being well this will be certainly something to look forward to next year at some point.

I look forward to this release too. To me, MEDIEVAL base contained an unusual period to begin the series. The game did provide for a recalibration to my thoughts on wielding heavy cavalry; deadly, deadly, deadly!

I certainly agree about the unusual period to start with but it certainly gives a cracking game with the all important ‘feel’. Richard Borg makes the valid point that the Crusades can be easily extended from this earlier period and I have no problem with this from my limited reading on the subject. The second Crusades expansion should be interesting especially if it adds in the Baltic Crusades and the Mongols!

It will be good to see when it does eventually land.

I always thought the starting point for these rules didn't seem very medieval to me! I suppose 'medieval' to me means 'classic' Hundred Years Wars battles in Western Europe, but then my knowledge of this 'period' is rather limited. The Baltic Crusades have been on my list to game for far too long as I have the figures (in bags) and plenty of reference material and rules. Always so many ideas and so little time...

I always thought of the period as been ‘late ancients’ rather than medieval and your point about the 100 years wat is a good one! For me the early period, say Hastings to the fall of Acre is about the limit of my medieval ambition although having said that the War of the Roses looks like good fun!

I am no expert on the Crusades - unless watching the extended version of The Kingdom of Heaven counts! - and my knowledge of the Baltic version not at all!