New Glory for the Union 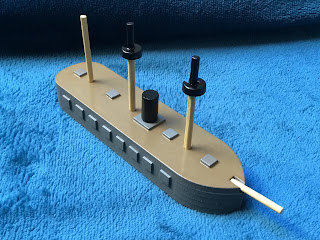 The U.S.S. New Glory in all her, well, glory. Very much of the ‘brute force and ignorance’ school of naval tactics - slow, unwieldy to manoeuvre but packing a punch. She is effectively a mobile floating battery but with a ram bow.
Halfway there! The second model from the four remaining recently constructed ACW ships has finally been finished. The U.S.S. New Glory - based upon the historical U.S.S. New Ironsides - will be used as the overall fleet flagship once I have the remaining models built. I know what I am building for the last Union ship of this batch - no details just yet other than to say it will not be a monitor! 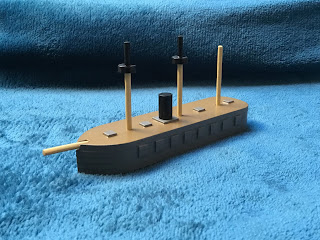 Another view from the port side.
Construction of the model was pretty straightforward. Five layers of 3mm thick MDF for the hull with the top layer having pre cut mast holes and a space for the stump of a bowsprit. The pole masts and bowsprit are from bamboo skewers, the gun ports are plastic card and the hatch covers are thick card. Dowel rod was used for the funnel and the fighting tops are laser cut MDF. The hull and hatch covers were painted using Humbrol enamel Matt 140 (Gull Grey) and the deck in Humbrol enamel Matt 110. The masts and bowsprit are Vallejo Buff and the iron work on the fighting tops are a cheap artists black acrylic. The whole lot has been varnished using Games Workshop Purity Seal satin varnish.
The final two models on the painting tray are the pair of Confederate turret ram types. As mentioned previously these are really a hybrid type as they are effectively a composite of two designs that were ordered and built but never made it to the Confederacy - with the exception of the C.S.S. Stonewall. I am hoping to have these ready in the next day or so and am looking to get a game in with some of them later in the week.
Posted by David Crook at 11:59

Another fine looking ship David, I really like the simple lines and glossy finish.

Well I must say she looks rather nice David. I love the gloss finish that just works so well. I'm currently reading about the salt water actions of 1861-62 in Battle Cry of Freedom, so fortunately I have a bit of an understanding of the pros and cons of the ships you have been building. As a complete novice on this part of the ACW, the level of detail is just right. Certainly plenty of gaming ideas already swirling around my head, but must stay focussed...

Thank you old chap! The glossy finish is actually satin and came about simply because my matt varnish had died! I actually prefer this fish as it has a kind of old school feel about it and also fits in with the style of the models.

Many thanks old boy! I am glad that by a happy mischance using satin varnish fits in so well with the design and style of the models.

I read Battle Cry of Freedom many years ago - it is an excellent history of the Civil War and a great primer on the military and naval side. I have settled on the last two models for this batch and when I get back to the ACW I shall be tackling paddle steamers and gunboats aplenty!

I am loving your results David.

Much appreciated old chap! I am pleased with the overall look and am gaining confidence with the techniques I am using. Now into action!

I really like the look of these ships and the clever use of MDF to construct them.

Warbases really made this easy for me with their superb service. They have turned out in a really attractive ‘old school’ style and I am looking forward to getting them into action!