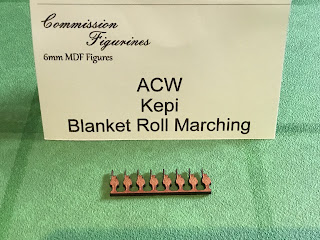 A few years ago, at Salute to exact, I saw a range of 6mm figures laser cut from MDF and produced by a company called Commission Figurines.  I was certainly intrigued at the time - Napoleonics and ACW were the ranges produced but the start of an ancient offering.

Fast forward to the present day and I was giving some thought to how best to represent the land side in conjunction with my ships models for the ACW. My first thought was to use the block armies - I have done this before - but a couple of articles by fellow blogger Steve J pointed me back at the range of figures produced by Commission Figures. Without too much persuasion I placed a small order for some ACW samples and the figures duly arrived yesterday.

These are flat figures and have the details etched on the surface. They are closer to 8mm than 6mm which unfortunately means that they a little too large to use with ship models in the way I planned but certainly they could happily fight as part of a combined arms style set up. Originally I had thought to use the gun crews for any deck mounted artillery but will not be able to (and yes, I do have a plan B for this) as they are too large. In many ways they remind me of WoFun figures but of course they will need to be painted or coloured in.

Coloured in? I have something I want to try with these and believe it or not is has been inspired by my Wofun ECW figures and also some message exchanges I have had with Peter Dennis. Peter uses fine pens for a lot of his work and so I thought perhaps colouring the figures in might be a better option for me given my aversion to painting. Actually even painting these would not be beyond me... 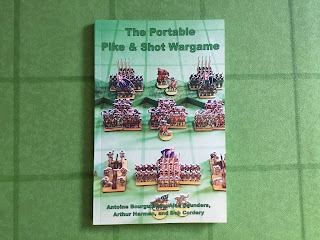 Oh yes indeedy! I am looking forward to spending some time with this over the festive period. A welcome addition to the Portable stable and by virtue of its collaborative construction augurs well for future titles covering other periods. Great cover photo as well....:-)

Mention of WoFun, and the timely arrival of Bob Cordery’s latest title in the Portable Wargame series - The Portable Pike and Shot Wargame - has given me much to think about for the new year. I have a final 28mm ECW order currently being readied by WoFun - this will be the Scots - and then I am set fair for some games in the new year once I have made provision for some suitable terrain. Long term I will look to change the basing of the collection but I want to get some games in first of all and Bob’s book, with its cast of thousands (3 actually!) will be a great place to start along with the Command and Colours variant produced by MSFoy.

Taking all this into consideration....

Despite my ongoing protestations and best efforts to avoid doing so the looming spectre of figure painting is once again rearing its ugly head. I want the MDF figures to work out with my colouring technique because if it does it will open up a number of avenues for me to explore. The scale is such that colour conversions would be easy enough and whilst the selection currently available is quite limited - Napoleonics, ACW and a small Roman range - for what I am planning they are sufficient. A small ACW force initially - when I say small I am thinking Command and Colours sized so around a dozen infantry units, 3 or 4 mounted and the same for artillery organised with a base of models per strength point - and then I may tackle similar for the Russo Turkish War. I will have to see how the colouring works out.

Work on the ships has eased right down to ‘care and maintenance’ levels but is still heading in the right direction. I feel very positive about the shape these two projects (soon to be three....) are  taking and so I am looking forward to completing the remaining models as soon as I am able. Adding the land dimension using MDF figures is an option that is well suited to me and I am genuinely excited about the potential they offer.

Madasahatta will feature next year and work will commence in earnest once I have the ironclads out of my system. I have an idea about the land side as well which will tie in with what I shall be doing for WW2.

I plan to dilute the above with some ad hoc Skirmishy style offerings - forces of around a dozen or so models so well below the Rampant series in terms of scale.

It only remains for me to take this opportunity to wish you and yours all the very best for the Christmas holiday and here’s hoping that 2021 will be a little kinder than this year has been.

Take care and stay safe all.

I hope you enjoy painting or colouring in the mdf figures as much as I have David and nice to know that I inspired you to give them a go. One of the joys (or pitfalls) of following Blogs I suppose!

Bob's book is not available for me to properly read until Santa has delivered it tomorrow, but I too have plans for these rules, but need to read them first to decide upon a basing system.

Your ships I have found fascinating these past few months and so look forward to seeing more of the same next year, especially some combined action with the mdf figures.

Have a great Xmas!

A Merry Christmas to you and yours , Tony

You blog has certainly given me much to think about what with MDF figures and blocks! Bob’s book is really good and you will enjoy the experience.

The ships have given me much pleasure over recent weeks and my plans for them are both achievable and enjoyable so next year should see some interesting games. The MDF figures will certainly feature!

Have a great Christmas!

And straight back at you old chap!

All the best for the festive season and a better 2021

The MDF figures look ideal for your purposes.

I recently bought some paint pens (https://www.amazon.co.uk/gp/product/B07485T22B/ref=ppx_yo_dt_b_asin_title_o08_s00?ie=UTF8&psc=1) that I’ve used quite successfully on small objects, and they might be something you could consider using to paint these figures.

You seem to have lots of great ideas/projects coming online for 2021, and I am looking forward to seeing them come to fruition.

Many thanks for the link - I have a feeling that an Amazon gift card will feature tomorrow so pens will certainly on the list!

The projects I am tackling are reasonably sized and are above all achievable. This is an important consideration given my somewhat fickle nature! Having a land dimension would be important as part of either the ACW or the RTW so I am hopeful that the MDF figures will work out for them.

I picked up a few of those ACW figures at Salute last year, and was quite impressed with them. Good idea to 'colour them in', I hadn't thought of that, but the semi-flat format would make it very do-able, and eaiser than painting? Like Bob, it made me think of paint pens - my local art material shop has a range of acrylic pens.
A very Merry Xmas to you and yours!

Merry Christmas David. All the very best for 2021. Keep on keeping on.

And to you old chap! There will be a lot of MDF action in the new year for sure!

Seasons greetings old chap and many thanks for the card!

The pens are on order and I will see how it work out.

I reckon that all we can do - keep on keeping on and I certainly intend doing so!

Bags of fun over Xmas
Lots on the go ;)