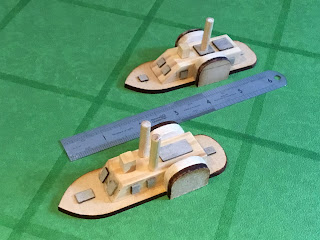 The dynamic duo. The newer of the two is in the foreground and you can see the similarities between them.  The technique I am using allows for a number of variations to the basic configuration which is very handy when representing the bewildering variety of river craft pressed into service historically. Note that the funnels are not fixed in place so may look slightly askew as they are in effect free standing at present.

Work on the building phase of what I am able to get completed for the ACW project is gradually easing down - work of the other four hulls will be complete as far as I can today - but I have finished the near sister of the first paddle steamer I built. I say near sister as she has a similar superstructure shape although sporting more funnels and with the paddle boxes moved further aft. The angle on the front of the superstructure is not as sloped as the original and so she appears rather more stately. The two hulls sporting an untouched Jenga block will look even more ponderous as befits this type of vessel.

I want to use fairly nondescript paint jobs for these ships as the plan is for them to be used for either side and as rams, transports or gunboats as required.

Both of thee models have been sealed and will be undercoated today. The paint job should only take a few hours so these will be ready for Christmas. Work on the Russo Turkish ships will continue as these are far more readily buildable with the material I have currently in stock.

Whilst the painting is underway I will look to get flags for the rest of the ACW collection organised.

Plenty to do but not quite in the way I planned!