Seasons Greetings and A Delicious Dilemma 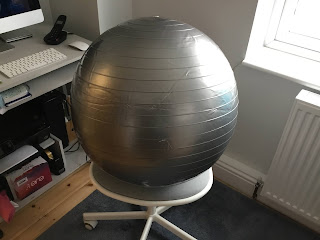 My good lady wife received the above from our daughter - it is an exercise ball - to help with her back problems. My first thought when I inflated it was along the lines of  “That’s no moon...that’s a space station!” Very handy for suppressing rebels and destroying planets....or even the odd game of X Wing!

First of all the complements of the season to one and all - it is getting to the end of what has been an extraordinary year so I hope everyone has celebrated in the best way they can. We were fortunate in that the whole family was assembled - the four of us plus our grandson - and so all was well. We have enjoyed a great couple of days - ate too much, probably drank rather more than was necessarily good for us and exchanged presents. There was also the seasonal family game of Monopoly - this year with a twist, it was the Mega edition with extra streets to buy and with skyscrapers to build. I actually rather like this version as it gets to the business end of the game rather more quickly than the traditional edition. Once a year only though! We also had a family walk to get some air and feed the squirrels in a small nature reserve near us - the small furries will even take monkey nuts from your hand!

I received a a welcome and useful crop of presents of which the Dremel 3000 (with 15 accessories), a copy of Frostgrave 2nd edition and half share of an Amazon gift card are the ones of immediate interest.

All in all it has been a very pleasant couple of days and has provided a welcome break from the daily diet of doom and gloom we have been used to for most of the year. 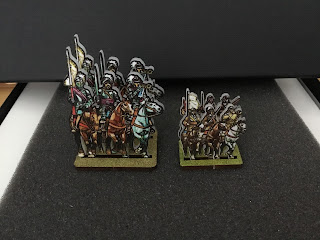 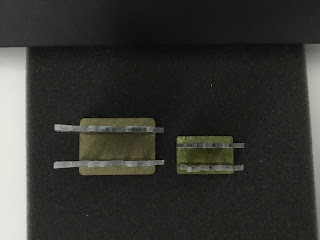 The delicious dilemma referred to in the title is a complete curve ball thrown at me by WoFun. If you recall I mentioned that I was going to complete the 28mm ECW collection by adding the Scots. By virtue of some selective disposals I ordered the pieces I needed and so on Christmas Eve in the afternoon, a parcel arrived from Romania. I did not open it straightaway as I had a few things to do but when I did there was a small problem. The entire order was of 18mm figures and not 28mm.

First of all I know that WoFun have been under a lot of pressure with office moves, expansion of the business as well as some Covid induced problems and so the odd mistake will be the result. My initial thought was to be a swift email to return the order and all would be well. Lucian at WoFun (the boss) is a top chap so I had no fears if this was the option I settled on.

I had not seen the 18mm versions of the figures before but I have to say that they are even better in my opinion! What I mean by this is that for my set up the 18mm figures are a much better proposition given my preferred gaming style and home set up. I thought about this and weighed up the pros and cons and so have made a decision. I am going to build up the 18mm collection to what I was going to do with the 28mm and so the larger collection will now be for disposal!

This may seem like a bonkers idea but it works for me for all kind of reasons. The terrain will be a better bet as I will use 15mm which will suit my 4” grid far more readily due to the reduced table footprint compare to 28mm. You get roughly double the number of figures for the same price as for the 28mm so the armies will look even more impressive.

I realise thus all seems a little radical but fortunately I am not so far into the project that this change would be a major issue. I need to order around 8 units to complete the entire collection - which now includes slightly more Scots than English - which can be readily funded from the proceeds of the 28mm set up - which is huge.

Best of all is the fact that the 28mm collection will be sold for less than half the cost of buying a comparably sized force new as much of the collection was gratis. I would not be looking to make a killing out of a sale - just to be able to finance the missing elements I need. There is a bargain to be had for sure so should anyone be interested leave me a comment with an email address and we can discuss ‘off piste’ so to speak.

In he meantime though, enjoy the rest of the holidays - I feel the lure of my Grandson’s laser tag game coming on!

It sounds as if the ‘mistake’ has has some very positive results! I spent part of this afternoon unboxing my WoFun figures, and I’ll be writing a blog post about them tomorrow.

I have a mixture of 28mm and 18mm figures, and prefer the latter to the former ... but the larger figures do have certain advantages, particularly for skirmish battles.

It was a big shock when I opened the box but I had something of an epiphany when I tried out a sample unit. Whilst the 28mm collection looks very impressive it was always going to be a snug fit on my various gridded playing areas. 18mm looks a far better option for my set up.

Firstly it's nice to know that you were able to enjoy a family Xmas, albeit truncated due to the local Tier restrications I'm sure. You know you're a wargamer when you see something like the ball and immediately think how you can turn it into terrain etc!

Secondly, I think the 18mm figures look better and certainly will give a better looking game in a smaller space. Also stroage will be a damned sight easier I'm sure!

Thank you for posting this. I was wondering which size to order (18 or 25) and I think you just made up my mind with your explanation.

Sounds a fortunate 18mm arrival for you.

“That’s no moon...that’s a space station!” Very Funny! Best wishes for the New Year of gaming!

"Has anybody seen my exercise ball" .. the theme tune to Star Wars starts playing in the background ... "David! Play with your own toys ... "

Your instant armies are starting to make sense to me!
But I think I am too old to change .. unless I spy a new period ...

First and foremost I should have said, "Merry Christmas David" I am glad you had a great Xmas :)

Ours was less travel, more mince pies and Zoom .. you had to be fast on anything snack-like as there was no sensible 'ration control' on valuable commodities such as Pringles and Doritos

It was a very good Christmas when all is said and done but it did feel a little subdued. Sadly SWMBO took a dim view of me attempting to use the Death Star - I could understand why she did nt like the idea of turbo laser turrets and Tie Fighter docking bays....

The 18mm option certainly fits in better with my home based gaming set up and so it is the correct choice for me. If you recall I was flirting with 20mm Napoleonics and this is as near as you can get.

I wish I had opted fr 18mm at the outset but at least I have now seen them both! The 18mm will work better for my set up with the added advantage of the fact that you get twice as many figures for the same money.

28mm is a lovely scale but for massed armies I simply do not have the space.

All the best and a happy new year!

A fortunate and happy accident indeed!

All the best and happy new year to you!

Sadly my wife was not quite so impressed at my improvisation!

Happy new year to you as well old chap!

I have the soundtracks to all the Star Wars films so I reckon that would be a good shout....

The 18mms will be a while away but I know what I need to complete the collection and the order is in.

It has moved a couple of other things into the frame as well so all being well 2021 should be an interesting time from the gaming perspective.

We tend to work on the ‘once it’s fine its gone’ basis and thus far have not run out of anything (with the exception of the beer running low....).

The complements of the season to you and lets hope that 2021 it a better year than this one!