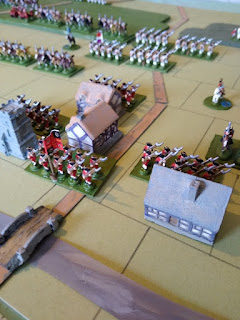 Battle is joined! Note the use of offset squares 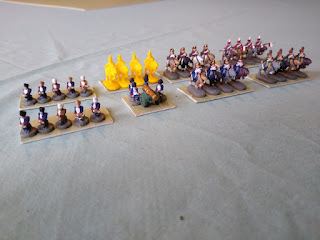 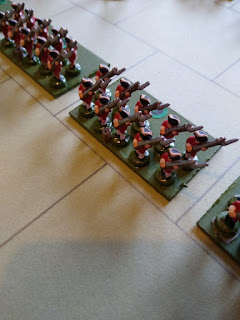 Close up of one of the units 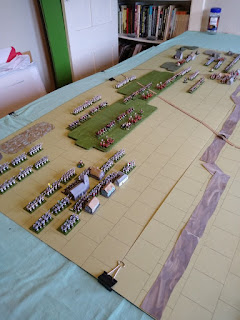 An overview of the action

A short while ago I was having a clear out of bits and pieces (no surprises there then!) and amongst the items earmarked for disposal was my collection of generic 18th century figures from the board game Risk.  To cut a long story short - and the pictures will do the talking in any event - The entire collection made their way to the home of Mr Chris Jarvis. Aside from being a very nice chap when I asked him if would send me some pictures of his set up he sent me the selection you see in this post.

Chris has raised some very attractive looking armies from what, to be honest, are fairly basic figures and they look quite superb when deployed en masse.

This is not a new idea as Kaptain Kobold has also raised armies in a similar fashion but I think it goes to show that with a little imagination and some basic modelling skills something quite remarkable can come from pretty modest beginnings.

Chris uses his own rules and recently made an approach to Hasbro to see if these figures could be made available once again. Seeing how good they can be made to look it would be handy if they could - I might even give them a belated spin myself!

Some years ago I bought several second-hand RISK sets intending to do something similar, but - as my period is Napoleonics - I finally had to admit I just couldn't accept battalions of infantry advancing on their knees, so they ended up in Chris's collection and he has done a splendid job, painting them as different nationalities and in campaign dress.

I've recently written a Portable Wargame version of Charge! of which Bob approves, so I hope we will be refighting Blasthof Heath with his 18th century troops in due course.

I must admit that the kneeling infantryman did not get my vote either! Chris has done a really good job with the figures and as you rightly say, highly detailed miniatures should not be prerequisite for a good looking game.

The Portable Charge Wargame?! I would be really keen to see this in due course and if you tackle Blashof Bridge or better still, Sittangabad, I will be properly delighted!

Fantastic pictures! I like the little Risk! figures and have played with some myself, though I haven't bothered to paint them.

Chris did a sterling job with these and the overall effect is very impressive for sure.