The Story so Far and The Final Pair 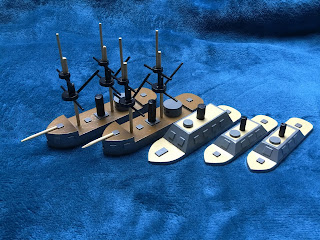 The Confederate fleet along with.... 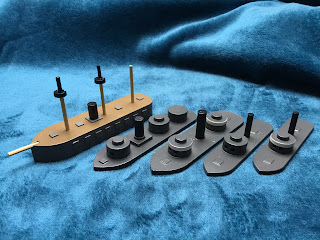 Whilst the final two models are under construction I thought it would be a nice idea to show the two fleets as they currently stand. There are a couple of minor points to be touched up slightly but nothing too major.  I have also yet to give them the full by hand brushed varnish but will do this once the full dozen are ready.

Over the past few days I had been thinking ahead to the final two models I want to build to give me a round dozen ships There was no particular reason for choosing twelve models but I have and so plans needed to be made for the likely candidates. Remember my models can best be described as ‘based upon’ rather than historically accurate and in the case of one of the two ships I have settled on for inspiration it really is anybodies guess what it actually looked like!

For the Union I have opted to use the U.S.S. Galena and for the Confederates the C.S.S. Georgia.

The building of these two ships will be straightforward but there are a few historical liberties that will need to be taken. The Union ship has a pronounced ‘tumble home’ to the shape of her hull which I am unable to replicate using the laminated MDF. It matters not though as the model I will build is ‘based upon’. In many ways she could thought as being a lighter version of the U.S.S. New Ironsides lookalike shown above.

The Confederate ship is rather more problematic in that there are various interpretations of what she actually looked like. There is also the small consideration of the fact that her engines were so weak she spent the entire time she was in service as a floating battery! Her eventual fate was to be scuttled but she is currently being salvaged from the Savannah river in order to clear the channel for large ships. Interestingly enough part of the haul recovered from the wreckage are a number of engine parts. Given the usually parlous state of Confederate engines it is not beyond the realm of speculation that she maintained her engines but was only able to use them for gentle manoeuvring. They were deemed to be too weak for offensive operations hence her fate to be deployed as a floating battery. In my set up she will have some degree of motive power - for gentle manoeuvres only - but would be at the mercy of the tide and current so would need to be used very carefully, perhaps as part of a combined defence using forts, mines etc.

To be tackles at some point, along with the second dozen ship models, will of course be terrain. For me this will mean forts and shore batteries. I have a couple of ideas to play around with but for now I shall concentrate on getting the last two models built and ready for action.

Nice to see both fleets as they currently stand and the remaining ships should finish things off nicely. An excellent effort all round.

They look fantastic David...
I really like simple and dare I say toy like aesthetic you have achieved...

Thank you old chap! They are stylised and simple looking and I found very out very early on that it was quite a knack leaving things out!

I am tempted to go full on gloss varnish with them!

Cheers old chap! It is coming together and the two models to finish this batch off will help dilute the ship types somewhat. I am looking forward to tackling the second phase - paddle steamers and gunboats mainly - which will round it all off nicely. In the meantime though - I need to think about some games!