Naval Developments in the ACW and Russo Turkish Projects 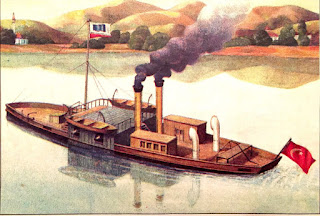 Feth-Ul-Islam class river monitor - there were 5 in the class, 2 of which were captured by the Russians and commissioned as the Nikopol and the Sistovo

It has been a busy weekend with a number of domestic chores to attend to so gaming/modelling time has been at a bit of a premium. I have made some progress though and not quite in the direction I thought I would! In fact, the progress I have made has taken me along a rather unexpected path but a welcome one all the same.

Research wise I have been looking long and hard at the Russo Turkish War and am happy that I have sufficient material to build the Danube stuff and also some of the Black Sea vessels which means, for the Turks anyway, ironclads. I am looking forward to building some old friends in their original configuration - I say old friends because most of them were rebuilt and served in the Balkan War or even the Great War! The last quarter of the 19th century was not kind to the Turkish navy but in the !870s they had a sizeable fleets of ironclads - certainly better than anything the Russians had in the Black Sea - but the perennial problems of finance, manpower and overall inertia reduced their advantage.

Anyway, there I was browsing through my copy of The Ottoman Steam Navy 1828 - 1923 when I came across some really helpful plans for some of the ships I was looking to build. Immediately I hit a snag. Some of the MDF Hull pieces I had cut by Warbases - the pieces featuring a central battery - were close to what wanted but annoyingly not quite close enough. It is not a problem though as I will get the appropriate pieces custom cut when they are back in custom cutting mode in the new year. In a way this has actually proved to be a blessing as it now means that I can focus on that which I can build from stock so to speak rather than aiming too far ahead.

This means that the Danube will be the main focus of my building efforts and there are some real delights to be found. The Turks had a class of five of the ships you see in the picture above and two of these were captured and used by the Russians. I am not building all five - four will suffice. Imagine it, a twin funnelled casemate ironclad gunboat with fore and aft spar torpedoes - what’s not to love? The Turks went one better and built a slightly larger version (only a single funnel with these but the same overall layout as the previous class, just bigger) and finally a pair of twin turreted monitors. That is eight models straight off the bat - with the two twin turreted monitors currently under construction. The Russians and Romanians made use of spar torpedo boats and indeed, in the case of the former, also locomotive torpedoes as well a lot of use of heavy high angle mortars - some of which were mounted aft on their ships. Plunging fire could be very effective against an ironclad where all the protection was concentrated on the vertical surfaces, less so on the decks. In fact the Turks lost the Lutf-u-Celil when’s Russian shore based mortar hit her in the boiler room and the ship exploded.

The two types of Turkish gunboat that were in use were of a similar design but the follow on class was larger overall and I wanted to show this differential but therein I hit a snag. I had worked out the hull shape I was going to use for the larger of the two types - 4” x 1” - but I really wanted a shorter hull for the smaller class. I thought about this  - ordinarily I would have gotten Warbases to the rescue - and then decided on some fairly drastic action. I decided to cut down the larger hull by an inch. 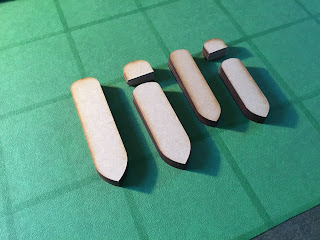 The hull pieces are stacked four deep but you get the gist of what I did. It has opened up a number of possibilities for the ACW project.

I was very wary about doing this as I have some bad experiences cutting MDF in the past. I am happy to say that it worked like a breeze. Using my trusty X-Acto saw I was able to cut the four hulls down and after some careful filing you would not know the difference! There was also an unexpected bonus.

The offcuts are the ideal shape and size for the boxed in paddle wheel covers that appeared on a number of ACW river steamers.

I had a careful look at this and decided that all I would need to see about building a couple of generic ACW side wheel paddle steamers would be a suitable hull shape. All of my templates are quite traditional hull shapes and are longer than one would expect for a river paddle steamer. Well, I cut down the 4” x 1” hull by and inch so why not the 5” x 1 1/4” then? I did this with four hulls and now have not only the shorter hulls but a further selection of paddle boxes, slightly larger than the previous ones.

So what does this all mean in real terms then? Well, I am in the position whereby I can build some of the Russo Turkish ships - certainly sufficient for some cracking river based games - and also some more for the ACW project. I will not be able to finish both projects until Warbases are back in the custom cutting business but there is more than sufficient variety for me to be getting on with now.

Well it sounds like you have an awful lot of ship building ahead of you David, which is no bad thing. When you muse is upon you, stuff like this is pure pleasure:)

I have learned from long experience that in my case it is always a good idea to make hay whilst the sun shines or rather build ships whilst the enthusiasm is there!

Fortunately this batch of models are fairly straightforward to put together so once I can get to it progress should be relatively swift.

As ever these will feature on the blog as and when ready.