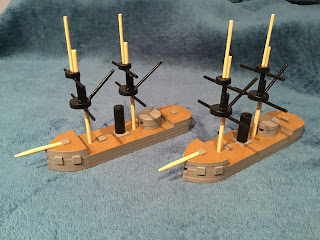 C.S.S. Sphinx and Cheops. Although identical they will be sporting different flags once they arrive which will serve to tell them apart. The mast assemblies are functional rather than to scale but they look pretty good to me and certainly add to the look of the thing.

After a busy and surprisingly fruitful few hours with work related stuff I was feeling rather productive so I set about finishing the the final two models from the current batch as a reward. They are now completed! I have finalised - and indeed have started - the designs of the additional two models for this phase of the project and assembly is already under way. I shall get these two models built and painted before the inaugural action but I am looking to be gaming with the dozen of them within the week. 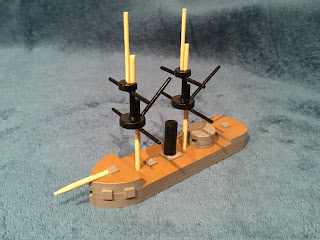 A study in singularity - one of the pair

The most challenging part of the construction of the two newest models you see above was of course the masts. By being methodical and careful they came together really well. I would also add that frequent ‘dry runs’ are essential, especially when you are in effect making fours masts to the same plan! As with all the models I have built there is a degree of artistic licence and practical compromise.

The masts are a great example of this as by careful positioning of spars and fighting tops one is able to ensure that strength is added to what is a quite fragile looking assembly. This would not be entirely accurate but it does make for a more secure gaming model! I mentioned in the comments of my previous post that I had to use satin varnish rather than matt and I am really pleased I did. I used an initial coat of Games Workshop Purity Seal spray varnish for what I call a ‘handling spray’ but I will follow this up with a hand brushed coat. The satin finish adds to the whole ‘old school’ look of the models which is very easy on the eye.

The ships are very much a hybrid design. I opted for a turret rather than the gun house with pivots so the ships are based upon two types the Confederacy had ordered but, with the exception of the C.S.S. Stonewall, never took delivery of.

I would be less than truthful if I said that I liked all the models I have built equally as I really like the look of these two!

They look pretty good to me too David! I can't wait to see these ships, monitors etc in action as they should look great when sailing the 'high seas'.

I am looking forward to adding the flags and to getting them into action but I want to get the last two built first. I did a staged fight on the gaming mat earlier and they look pretty good!

Excellent little ships David. Your experience is clearly growing as you build more complex vessels. Looking forward to seeing these in action in due course.

Thank you old chap! I am pleased with the rigging - it is a triumph of functionality over accuracy!

Cheers Bob! The second phase of this project will feature paddle steamers so I will need to get some bespoke MDF pieces organised. I was very pleased with how these two came out as the prospect of making the masts was a daunting one!

I shall build and paint the final two and then organise an action - I have something rather special in mind!

My first reaction when I saw those ships, David, was 'Wow!' Magnificent! I've been very impressed with your whole naval project, and have to admit that MDF makes a fine material for naval construction (Balsa is easy to work, but has its drawbacks). I'm certainly looking forward to seeing them on action! (You've also got me thinking about applying some varnish to my navies...

It seems I'm not the only one who reckons that the addition of masts and spars and fighting tops adds a little character to a vessel!

Just by the way, those merchant ships and small craft of yours from a few postings back have been the inspiration for my beginning the construction of a merchant marine. So far just the one armed merchantman, but there'll be a couple more to come...
Cheers,
Ion

Thank you old chap! I have only just scrapped the surface with the potential of MDF but what has been done so far by Warbases has been really good! You are right about Balsa - I enjoy using it but it would not have worked so well for the size of models I am building. The varnish angle came about by accident as my matt varnish dried up! Satin works well and does not glare as much as gloss under artificial light.

I was worried about the masts but am glad I did them and will certainly be making more going forwards.

The merchant ships I posted previously are those of David Manley, some of which I believe came from New Zealand! Good to hear you are underway on the building front - I have the final two models for this batch under construction. I will look forward to seeing what you are working on!

Thank you old chap! I have two more to build for this phase of the project - work has commenced on these - and then it will be a change of pace with the gunboats etc for Madasahatta. Once they are built it will be back to the ACW for the final push of around another dozen models. The second batch will be more river focussed so there will be paddle steamers and gunboats aplenty!

Once the final two models I am building are finished I hope to be running a game with them. I have a scenario in mind and if it goes well it should be a hoot!