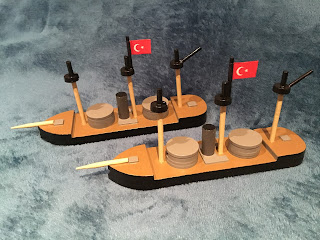 There is something rather majestic about painting black hulled ships! Reduced rig for inshore use and with the flag of Turkey fluttering bravely from the mainmast.

The first two ships for the Russo Turkish War mini project are now finished. They are also the first of all the models I have built so far to have their flags. The ships represent the Luft-u Celil class river monitors, one of which was sunk by Russian shore based heavy (6”) mortars. I am really pleased with this although as usual they are ‘based upon’ rather than museum quality scale models. As is my standard I have depicted them with their reduced sailing rig for inshore work as they were based on the Danube. 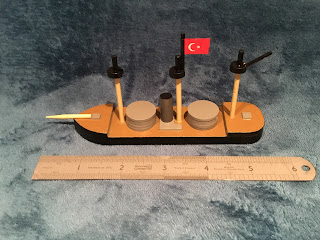 I have six Turkish gunboats to build next although two of these will be for the Russians. Then it will be on to the spar torpedo boats and a Russian steamer to act as a tender. Circular Russians and Turkish ironclads will be next year once Warbases are back in action. 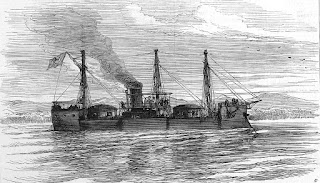 One of the class as depicted in the Illustrated London News

Now that we are in tier 4 I reckon I will have a lot of time over the next few weeks to get the other models finished - as well as a further half a dozen or so for the ACW.

They look very nice David and at least Tier 4 is giving you some potential extra hobby time!

Many thanks old chap! I finish work on Christmas Eve until 04/01 so I want to try and pack in as much ship building as I can before the end of the year. If I can get the 19 models completed that I am planning I will be delighted as it means I can game either the ACW or the RTW. It will also mean that my ‘ironclads’ project will more than half complete!

I’m really impressed with this pair David. Not museum quality for sure, but they look aces. Sturdy enough to game with and it’s immediately clear what they represent. Nothing wrong with that and a lot that is right!

They are designed as gaming pieces or are ‘purely representational’ as is the mantra of our club. Building the overall look of the original and not being too hung up on scales and detail is hugely liberating.

Me and anything Turkish - you just knew it was on the cards!

I am having a lot of fun with the whole ship building thing and I note that Blood Bowl has returned down under!

Thank you old chap! I really enjoyed building these two and am very excited about the next batch. The black hulls really pop with models of this size.

They look lovely David...
I am looking forward to seeing your ships in action...

I have found myself saying this a few times this year... I honestly don’t know how people without a creative hobby or interest have survived this year without going mad...
Yes I do realise wargamers are a bit mad anyway, but for this year it’s definitely the right kind of madness...

I must admit to being rather taken by them and they are the first Turkish ships I have built since the South East Asia campaign that followed Madasahatta in the late 1970s!

You are quite right about the whole madness thing and it being the right kind - it has certainly kept me more or less same this year!

The first action will probably be with the ACW kit as I have more of it ready to use but the Russo Turks will not be far behind!

They look great! I think the black and red elements of the colour scheme work really well together.

Thank you old chap! I am looking forward to more black hulls to come!

The paint scheme and flags really bring these ships to life. They look excellent.

Thank you old chap! I am really looking forward to getting to the ironclads for this particular project! Seriously though, these are designed as gaming pieces first and foremost so by leaving out anything that is too fiddly detail wise (and probably beyond my modest building skills) one still has the overall ‘look of the thing’. I like to think of them as being the naval equivalent of old style toy soldiers - floating Britain’s if you like!

Thank you old chap! Tony at Brigade Models did the flags for me - they are self adhesive wrap around types - and I have various nationalities other than the Turks and Russians and the Union and Confederate. I shall be having a flag day soon to finish the ACW models off. All I did was to colour the edge nearest the flag staff (all my flagstaffs will henceforward be black!) and touch the edges with a suitably coloured pen to disguise the white. They have been satin varnished as well with no ill effects.