The Curious Case of the C.S.S. Georgia 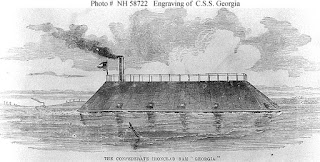 An engraving of the C.S.S. Georgia. 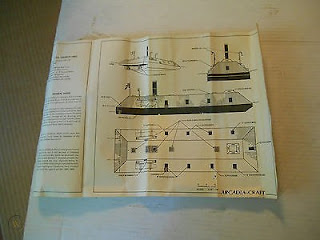 Plans for wooden model of the ship produced by Arcadia Crafts - note the pilot house at one end with the funnel at the rear.

Conjectural plan of the C.S.S. Georgia with the ‘straight line’ fore and aft deck shape

I really thought this would a straightforward job to do but I can tell you, it has given me pause for thought! The C.S.S. Georgia was a casemate ironclad built in Savannah but fitted with engines that were barely sufficient for the vessel to make two knots against the planned eight. This meant that she was deemed to be incapable of offensive action - the currents around Savannah are apparently quite brisk - so instead she was used a floating battery. That was her career until she was scuttled to avoid falling in to the hands of the advancing Union army under Sherman in 1864. She was built after having been funded by the marvellously named Savannah Ladies Gunboat Association to the tune of some US$ 115,000.00.

What remains of the wreck is currently being salvaged but aside from a number of period lithographs what she actually looked like remains a mystery. What we know for definite is that she was designed to what became the easy template for an ironclad given the Confederate shortage of properly skilled labour die to wartime shortages. This hull template was similar to that of the C.S.S. Louisiana. What we also know is that the ship was designed so that at speed the fore and aft deck would in fact be submerged - which was also the plan for the C.S.S. Virginia. At a speed of two knots I really could not see this happening somehow!

I have seen a number of illustration of her which show her with fore or aft decking - just the casemate - but whilst I could understand this from the point of view of a static floating battery surely what was designed as a casemate ironclad ram (although how that would work at two knots is anyone’s guess!) would have some hull form or another?

I have checked a variety of sources and reckon that what I have settled on is probably as good a guess as anybodies. However, to cover both options I have made two models to represent her - one with a ‘proper’ hull and one that is in effect an armoured box. I have also made the two models different sizes so that the floating battery option looks more imposing than the fully formed hull version. This is merely to make it stand out more. 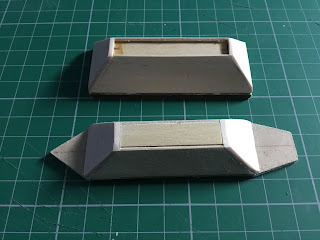 The basic models are pretty much done although I need to add the gun ports and hatch covers. In my set up I am allowing the C.S.S. Georgia to be able to move, albeit very slowly, meaning she will be at the mercy of the tide and current.

Originally I did not want to model specific ships for the project but this particular vessel piqued my curiosity and so adding her to the Confederate strength as ‘low speed or static floating battery’ would certainly have a degree of historical accuracy. The Confederates suffered from a shortage of suitable power plants and this was also the Achilles heel of the Louisiana and Mississippi - both of which were much larger than the C.S.S. Georgia. The hull shape also has a degree of historical accuracy as it was felt that it would be easier for un or semi-skilled labourers to construct.

As a ship she will certainly look the part but sadly the reality will be a little different as whilst she can fight she certainly cannot flee!

I have also seen version of this with - horror of horror - rounded ends of the casemate! I will be mounting the gun ports slightly up from the waterline - simply because they look better. I rather like the idea of having the smoke stack at the opposite end to the pilot house though as opposed to being in the middle.

I should be able to finish both tomorrow and then on with the painting!

There has to be a great VSF unit in there somewhere!

One of the problems, I think, of reproducing ACW naval craft - especially the casemate ironclads and monitors, is that the pictorial depictions are so varied - and the quality not great besides. I have a very fine History Of the Confederate States' Navy (Thomas Scharf), but, frankly, many of the woodcut pictures give only the vaguest idea what the actual vessels looked like. All I know of CSS Arkansas, for example, is that it was a casemate ironclad, carrying 10 guns - 2 fore and aft, and 3 in each broadside. They weren't even the same types!

So your ... impressionistic? ... approach makes a lot of sense to me.

Incidentally, my 'One Brain Cell' naval rules for ACW riverine, assumed a river current of 2 knots. So your CSS Georgia would not be able at all to swim upstream. That was true also of CSS Louisiana, which was basically little more than a raft, as its design left it near-on useless even for a floating battery!

The lack of resources available to the Confederacy made ship-building a real problem.

I think that artistic licence is an essential commodity for this period for the reasons you mention!

There has been some posts about the C.S.S. Georgia across the net based on the ongoing salvage of what is left of the wreck. They have picked up some engine bits and pieces which implies that they left her power plant onboard. It seems that hulls were never the problem although armour, armament and above engines was.

Apparently the currents around Savannah are quite brisk so if she had sailed it could have made for an interesting experience! As a floating battery I will allow her to be able to swing about under power but that will be it.

I would be interested in seeing your OBC ACW rules as I am having a long think about how I want to do this - I know the end result but am struggling to get the bits and pieces in place to get there!