Ironclad Plans and Rules of the Game 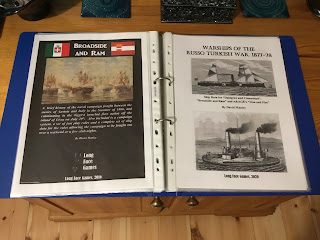 The ever increasing folder of rules by David Manley!

Busy day today as we celebrated our daughter’s 25th birthday with a ‘pre-tier 3’ lunch out. As a result it was just as well we did it today!

The plans for the current building project have moved forward and so I have a better idea of what I will be  making. I am looking at a further eight ships for the ACW and a dozen for the Russo Turkish War. Once Warbases are back in custom cutting mode I can then get the final ships built for both projects finished. This means that the current build is now at around twenty or so models - a lot to be sure but fortunately many of these are quite straightforward.

In the meantime though, I have also been spending some time looking at rules. I am really spoilt for choice in respect of what is available commercially but with the degree of perversity I am renowned for (when it comes to rules that is....) I have this burning desire to do my own thing in some fashion. I have previously started on a variant of Bob Cordery’s Gridded Naval Wargames ACW set but seem to have hit a dead end with them. One conclusion I have been coming to though is that I want to use a square grid rather than hexed so this will have a bearing on things for sure. I fully intend using the models with any kind of rules - gridded or otherwise - but am really keen to devise a square grid based set.

I like the idea of using eight natural compass points for directional headings rather than the six of hexagons. My favourite age of sail rules - Ship ‘O the Line by S. Craig Taylor - use squares with ships occupying two of them. Turns were made by swinging the stern in the opposite direction to the prow of the ship and the rules also included provision for diagonal moving and firing. Some time ago I thought about tweaking these into an ironclad set but it would have needed way too much work to be worthwhile.

I have been looking long and hard at the two sets for the period produced by David Manley as well as his really useful campaign supplements. Needless to say I have been looking at the one featured in the picture above! They have given me a number of avenues to think about in much the same way as Bob’s rules and also those of Andy Callan. I certainly have rules comfort blanket if my own ideas do not work in the way I would like.

Fruitful thoughts are gathering in your head David!

Well you certainly are not short of options on the rules front David. Interestingly for ship battles I'm favouring hexes over grids at present, but as I've yet to play a game, that of course may change!

It would be really easy just to pick a single set of rules and go with them but when has easy ever been an option?

All of the sets have something to commend them so why on earth do I want to do my own thing? Probably because I can!

I really want to get a set to use on a square grid - again I can offer no logical explanation for this other than wanting to do so.

We shall see but the first priority has to be building the models.