A Slight Change of Plan 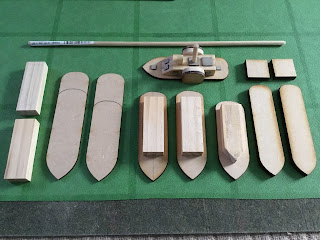 On the stocks at present. The two Jenga blocks on the left requiring cutting as do the two hulls next to them. There are three models currently with the superstructure only in place whilst the pieces on the right are for two Turkish river monitors. Note the dowel rod from which I shall be furnishing eight funnels.

Hmm - I should have checked my supply of building materials before deciding on the building programme in the run up to Christmas! I do not have enough of the requisite parts to build the six paddle steamers for the ACW project although I am able to partially build them. Essentially it is a question of paddle boxes. I am using the stern section of the 4” long hulls - making them 3” - which are effectively off cuts. They are a nice shape to use and by backing them with some balsa wood I can get a pretty good paddle box assembly. The problem I have is that I do not have enough 4” x 1” hulls section to cut down to make the boxes - I have but a single one left over.

I will go as far as I can go with them - I can complete the ‘sister’ ship to the model of yesterday - but will need to get some bits and pieces from Warbases in the new year. I will be able to get the next pair of Turkish ships completed and indeed, I should be able to make more progress with the Russo Turkish War models than for the ACW.

One thing I will do over the holiday period though, will be to give all the ACW models the appropriate flags. Tony at Brigade Models did a sterling job on these and I am really pleased with them. I will point out in advance that the Confederates do not have the later naval ensign - the one with the white field. I will be using the earlier version as well as the well known battle flag.

Taking all the above into consideration it means that work will continue over the festive period with the models for both projects but with a definite easing down of effort. However, this will give me time to attend to a couple of other associated tasks - the rules I plan to use as well as getting a game in. There is also the small matter of getting my next Warbases custom order organised - and this is going to be a large one!

All the best to you and yours. This project is fascinating - a combination of old and new. Looking forward to seeing your progress.

And all the best to you as well old chap! I am really enjoying the mix of old and new and have some rather exciting ideas with it all for the new year!

Looks like you’re not going to let the grass grow under your feet (or river pass under them) over the festive period.

All the best for the Christmas Season David from Chris, Governor of Schloss Nundanket.

I look forward to your book of plans and building tips when it is published!!!!!

In many ways I am having to pace myself until I can get the Warbases order organised but I shall use the time wisely over the festive period. Actually this may well be doing me a favour as it means I will to be left with nowt to do!

I have in mind a couple of ‘how to’ posts that I will post on the blog but this will be dependent on how conversations progress with Warbases in the new year.

The models look good once assembled and painted but trust me, there are industrial levels of bodgery undertaken to get to that stage!