War at Sea in the Ironclad Age 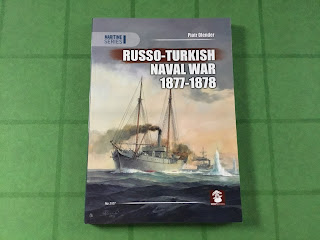 An absolute peach of a book and series although I only have the above title and the volume on the Pacific War (note to self: look out for the others in the series!).

It has been a strange couple of days. The first batch of ACW models have now had their ‘brush’ coat of satin varnish and look splendid. I am pleased I opted for satin varnish as there is a pleasing sheen to them that is not so full on as gloss and so makes taking pictures a lot easier. I have still to attend to the flags but I shall do this once my Christmas present arrives (a Dremel) as I really do not fancy drilling flag staff locating holes by hand (note to self: make sure you drill out ALL the holes you are likely to need before assembling and painting the model!).

My plan was to next tackle the gunboats and inshore stuff for Madasahatta but this has now hit a small problem. In order to make the models that I need for this project I would need a number of bespoke pieces of MDF cut by those very nice people at Warbases. Sadly they are not taking custom orders now until the new year so that they can focus on clearing the conventional backlog of orders they have. There are two positives from this. Firstly it is good news that they are as busy as they are and secondly, it gives me more time to really think about and plan properly for the next batch of models - both Madasahatta and the next batch of ACW ships.

In truth I am quite pleased that Warbases have this minor delay in place as I want to be really sure about what I want next and so need to plan carefully which takes time. It also means that I can think about the bits and pieces I need for the pre-dreadnought phase.

In the meantime though, I am in the position of having plenty of hulls and bits and pieces for certain types of ship. I want to carry on building whilst the momentum is there and so I have started to look once again at an idea I first mooted before the ACW ships were started.

My interest in the Russo - Turkish war of 1877 - 1878 has been lurking in the background for sometime - I  refought one of the land actions as a year end game a while back using the block armies - so when this book was published I picked up a copy and was immediately inspired! There is plenty of potential for actions along the Danube and in the Black Sea although my feeling is that these will feel similar to the scale and style of action I would be fighting with the ACW ships. What I really wanted was something on a larger scale. I think I might have a workable idea that moves into the realms of ‘what if’ but would be good fun all the same and would keep me building models.

I am thinking along the lines of an expanded scale of naval activity in the Black Sea and the Danube. By allowing the Russians to gain some heavy units the Turkish naval superiority (more on paper than real) would be offset and it means I can build some decent sized blue water types.

Another alternative would be to go full on ‘imagi-nation’ and resurrect those two doughty old antagonists of Fezia and Rusland which would open the doors to all manner of things. 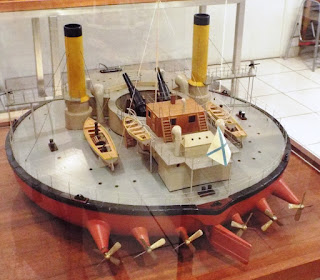 Will it mean circular warships for the Russians? You make think that....I couldn’t possibly comment....

Well the Russo-Turkish War seems to be getting some interest on various Blogs and forums (fora?) of late, which is good to see. The Black Sea and Danube operations are perfect background info for Imagi-Nations gaming, which is my main theme these days. As for that Russian ship, I want one and I want in now! ;)

There is a lot of potential here and ironically this was the period I was looking at with an imagi-nation extension before I started work on the ACW models. The Turks had a rather nice class fo 5 casemate ironclad gunboats - two of which were captured and used by the Russians! There are also spar torpedo boats used in action.

I want some bigger ships though although the Danube would be a good place to start.

I nearly got suckered into doing the Russo-Turkish War when I read Turkish Gambit by Boris Akunin. Fortunately my tight-fisted side won out.

The danger for you doing the naval side, is you might get tempted into doing some British vessels too in a sort of ‘what if’ the Russians had ignored our warning not to take Constantinople! 😃

🎶“We don't want to fight but by Jingo if we do,
We've got the ships, we've got the men, we've got the money too,
We've fought the Bear before, and while we're Britons true,
The Russians shall not have Constantinople.” 🎵

Way back in 2012 over three posts I refought a battle from the Russo Turkish War using my block armies. It was enormous fun to do!

Many thanks for the lyrics an funnily enough thoughts of a representative British squadron have certainly crossed my mind!

I have the book but haven't yet had a go at the naval aspects. If you persuade Martin at Warbases to do them as kits, I would be in.

Warbases kits for ironclads is something we will be discussing in the new year - initially from an ACW perspective but who knows?

I have the first batch of ‘based upon’ Russo Turkish ships under construction and hope to have them finished later in the week.

This is certainly looking very interesting David...
I love the Round Russian Monitors/Gunboat...
Where is the picture from?... I ask because I feel I have seen that model before...

A circular boat
What could go possibly wrong ;)

Many thanks for the email - and the museum tips! It certainly is a curious looking beast!

Apparently quite a lot! They will be fun to build though!