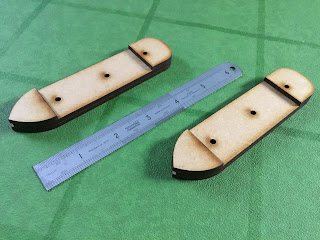 The first of the Turkish ships under construction and yes, there will be masts....

This is not going at all as I imagined it would! The various bits and pieces of MDF I currently have will be more than sufficient for me to be able to build a number of types for the ‘Russo - Turkish lookalike’ mini project I have now embarked upon. I have called it a mini project simply because it will only be the naval side - the land operations will be conducted using the block armies - whereas I am planning something else for the ACW. The number of ships will probably be the same as for the ACW - around two dozen - and there will be a mix of Danube and Black Sea types. As usual scales will be all over the place and the resultant models will be ‘based upon’ rather than accurate representations. I will also be taking some liberties with the historicity in that the Russians will be bolstered by some Baltic types as well as some ships that appeared after the war.

I did say it was ‘lookalike’ project....

This was not what  I expected to be building next but as I need to get some custom pieces of MDF from Warbases and they will not be looking at these types of orders until the new year I have needed to change the running order somewhat. As mentioned previously, Warbases being busy has done me a favour in the short term as it means I can properly plan the extra bits and pieces I need. I still want to keep building though so if I can’t build what I planned then I will build what I can! 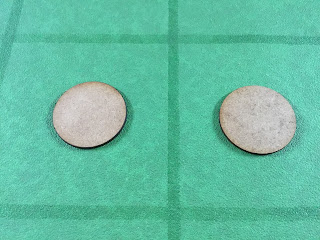 40mm circular bases - now I wonder what they can be for?

In the meantime though, I have taken the opportunity to get some bits and pieces in from Peter Pig to use with some of the models I will building - this includes for the ACW as well. I have ordered some of their Hammerin’ Iron 1:600th heavy and medium deck guns along with some ships boats on davits. These will be a big help for the gunboats or indeed anything that has deck mounted (and exposed) artillery.

Once again the Rayleigh dockyard will be a hive of activity and the first of the models are already underway.

Frankly all far too tempting David for a poor weak soul like myself;). The Baltic and Danube ships appeal, but then anything a bit left field easily grabs my attention. As for those circular discs, I think they will look rather nice... :)

I have yet to finalise the roster of ships for this but I have sorted out the first dozen! There will also be some spar torpedo boats in the mix which will be fun. For background material I have downloaded Hobart’s story from Project Gutenberg and am on the look out for some RTW freebies from the same source.

I am rather looking forward to this and believe it or not I actually have generated some modelling material that could be readily used for some ACW models!

How do you get such a smooth and symmetrical finish on your" hulls? Is it simply patience and sanding? Perhaps you should publish a "How-to!"

The ‘secret’ is using laser cut MDF in industrial quantities! Seriously though, most of the sanding I have needed to do tends to be on the casemates and getting the angles to line up is a process that requires care and a choice vocabulary.

I may do a ‘how to’ post but for the moment my construction technique is very much an impromptu affair - I almost make it up as I go along!

I can feel a Novgorod coming on.

Thanks. Do you have the hull layers laser cut to ship shape (pun not intended!)?

The hull layers are laser cut to a template that I designed and sent to Warbases who produced it in 3mm thick MDF. The largest size - 5” x 1 1/2” is available as plain or with three holes for masts and a recess for the bowsprit. All I then do is to build up the layers, add the appropriate deck details and upper works, seal, undercoat, pain and varnish!

I deliberately went with a very conservative and generic hull shape which is sufficiently ‘boat - like’ for my needs. I have various sizes of hull - I have only used two thus far - and plan to use some of the smaller ones for the Russo Turkish ships.

Perhaps Warbases should add them to their catalogue and pay you royalties!

I have spoken to them about making some models available in kit form based on a couple of my more generic designs and it is something we will be speaking about further in the new year.

It has been a godsend though as having these pieces laser cut saves time and means that a degree of uniformity in design is possible.

40mm Pizza! Huzzah! Look forward to seeing it afloat, going round in circles :-)

I think I might need some larger circles - the ones I have are 40mm across which is rather on the small side. I am tempted to make use of some old CDs....