The Great War in Africa 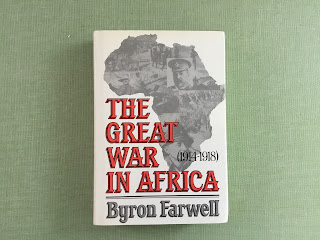 A cracking read and with a huge amount of gaming potential. Although published after Madasahatta I am pretty confident that Eric would have loved this!

Now here is the thing. As you know both SWMBO and I are regular visitors during the summer months to a number of local bot sales and charity shops. As a rule any purchases made at either tend to be inexpensive and so do not really make a dent in the budget. I am always on the lookout for military or gaming style stuff and even if I do not want it then the chances are I can usually find someone that does. Amongst my circle I have a rule whereby if anyone takes an item this acquired off my hands it will be at the price I paid for it. Occasionally I will buy an item that will be sold on and a couple of times I have done rather well as a result!

The pickings for me from boot sales or charity shops have been rather slim recently so I then have an occasional trawl through Facebook marketplace or even eBay to see if there are any bargains to be had.

The book you see above is just one of these. I saw this listed as an auction on eBay and placed a very low bid for it. Imagine my surprise and delight when I won it for the starting bid of £1.99 plus postage!

I have owned this book in the past but it, along with a number of others, mysteriously vanished a few years ago whilst we were having some work in the house done. As an aside I have a feeling the box may have been thrown out inadvertently - the pain of losing a pile of books (including a full set of Conway’s fighting ships covering 1860 to 1946, happily these are now replaced) is still very raw! 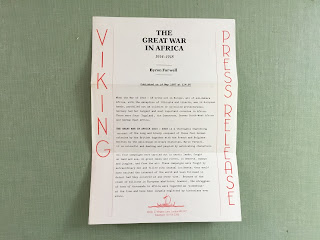 The front of the flyer…. 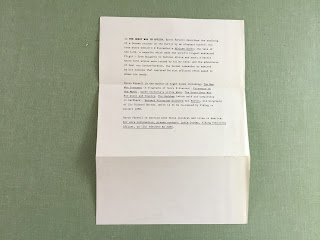 The book is in really good condition and contained within it pages was a copy of the original press release ‘flyer’. Farwell tells the story of the war in Africa well with unsurprisingly the story of Lettow-Vorbeck campaigns occupying a large portion of the book. Lake Tanganyika, the Konigsberg and South West Africa all feature and so the book forms a good primer to this theatre of the Great War.

I am delighted to have this back in the library and even more so given how inexpensive it was!

I had the email to say that my Warbases order was on the way so I will finally be able to crack on with the last of the ACW ships. Work had begun on cleaning up the old west gunfighters I have prior to painting them and I have seen some ridiculously cheap MDF buildings that I am tempted to get although I have not discounted building my own yet.

It is a very broad canvas to work on for sure with plenty of ideas for games large and small. One element I shall be tackling will be the Lake Tanganyika expedition - naval once again - with the vessels being scratch built naturally. The East African land campaign has a lot of potential as well although whether I would commit to it using figures is another matter. I could readily use my block armies for this but we shall see how the mood takes me.

It was ridiculously good value as well!