(Bad) Back in the Office 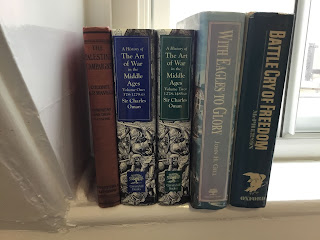 A rather eclectic selection - all destined for disposal

For the purposes of this post I am of course referring to pre pandemic and rather more optimistically perhaps, post pandemic! I have been away from the office on furlough since the very start of the pandemic  and yesterday was my first day back full time in our new suite. The day went as well as it could - the commute was fine with everyone socially distanced and with masks in place. Our new office - which is the same building as our old one, we have merely moved up a floor - is quite small but large enough for our needs once it has been sorted out. That was the task for Monday and much progress has been made in sorting out files etc. The technological side of it has a few teething issues but all should back to normal in a few days.

My role in all this was limited as I have done something to my lower back which means bending and lifting anything larger or heavier than a bag of sugar is pretty uncomfortable. It seems to be worse when I ‘transition’ from laying or sitting down to being upright. Walking about is easy enough as long as I watch what I am doing. It has of course meant that trips up into the man cave have been temporarily put on hold with heinous impact on my modelling of ACW ships i.e. nothing has been done at all!

My desk in the office has been sorted out though and I was pleasantly surprised, albeit it rather short lived,  to find the books you see above. These were acquired from eBay in the months leading up to the start of the pandemic and were a snapshot of what was on the project schedule f two years ago.

I know why I did not take these home and the memories came flooding back as to why. Aside from the condition of the books being below my minimum acceptable standard they all have one thing in common - they all have rather effusive dedications inscribed on the endpapers.

There are a few things I always try to stick to when buying books.

1. I prefer a hardback version if possible

2. I have a pathological aversion to anything decided as ‘ex libris’

3. The same as 2 except relating to ‘book club’ editions

4. No hand written inscriptions of any kind

It always irritates the life out of me when sellers on eBay do not mention about any of the above!

The books in the picture are now surplus to requirements (the Gill title has been claimed) so if anyone is interested drop me a line to drcrook@btinternet.com and we can work something out. They were not expensive when I purchased them so they will not be so now.

I will not bore you with the whys and wherefores around getting these books but I did want to mention one of them. 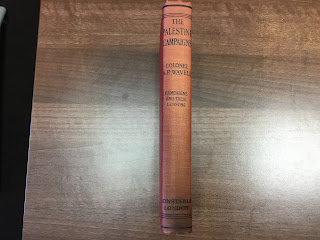 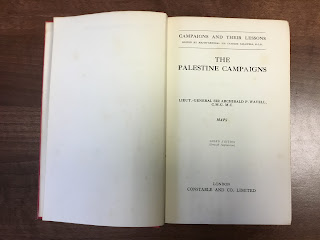 The Palestine Campaigns by Colonel A. P. Wavell (yes, THAT Wavell) was originally published in 1928 but this copy is of the third edition, 7th impression published in 1940. It was slightly updated to reconcile with the official history of the Palestine Campaigns and the book itself is a really useful guide. There are plenty of detailed orders of battle, several maps (including some fold out types), a history of the campaign as well a useful chapter on the lessons learned and the value of cavalry.

I am interested in the Middle East during the Great War but, unsurprisingly perhaps, this only extends to the Arab and the Senussi Revolts. It is an interesting read though with plenty of inspiration for some WW1  cavalry heavy actions for a change. 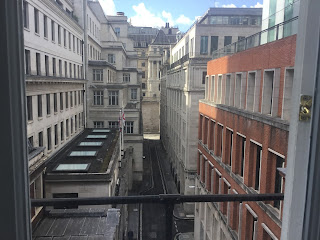 The view from my desk. The building you see in the centre with clouds above it is the ‘old lady of Threadneedle Street’ herself - the Bank of England.

I can empathise with the bad back issue, as I've recently been diagnosed with mild lumbar scoliosis and moderate degenerative disc disease. Oh the joys of getting old!!!

I must admit I quite like dedications and Ex Libris in second hand books , I think it gives a sense of history to the book .

Sorry to hear of your diagnosis old chap - I hope mine is a temporary condition but as you rightly pointed out - the joys of getting old can take many forms, none of which are usually pleasant!

You have a point about the whole ‘history’ element of a book but I am afraid it does not work for me.

I should also have mentioned that another ‘beet noir’ of mine is books that are poorly packaged for posting….

I am also an advocate of hardback books, but I will by second-hand ex Libra’s copies if they are in good condition.

It’s not the most inspiring views in the City, but at least you are near a window and not too far from the Tube and mainline stations.

I have only ever seen some really unattractive looking ex library books so perhaps I have just been unlucky in that respect!

The view is rather better than from our old office and as we are higher up the room feels a lot airier.

Sorry to hear about your back - it gets to us all eventually. Give it a rest and it’ll no doubt recover. I managed to retire at 50 and the thought of commuting into London and sitting in an office all day fills me with existential horror. Keep plenty of hobby related Nick knacks about at work to remind you of what’s really important.

We are all set to return to the office next month… also to a new area.
It’s should be interesting after another a year and a half away…I will of course be insisting on a degree of social distancing… I have purchased a six foot long cattle prod to keep my personal space free from intruders.

The back has proven to be surprisingly inconvenient! I am sure it will not last long but it did serve a reminder of the importance of good posture etc - especially as one gets older!

I have five and half years to go before I retire but I am really looking forward to it as I will have done my bit so others can take over!

I have visions of you wielding a 6 ft cattle prod rather like Chirrut Imwe in the Star Wars film: Rogue One…..

I know what you mean about gushing inscriptions - a couple of these fall into that category!

Hope it goes well for you being back in the office David. I empathise with you on the back.

I’m with Svejk on books with inscriptions. Adds to the history of the thing for me.

Watch your back, David -
Backs are useful - you can put it into things, I'm told. I'd see a quack about it soonish - these problems are apt to get out of hand. Take it from one who hasn't taken this advice. Fell off a ladder some 15 years back, landed near arse end of the spinal column, never got it looked into, and now it's starting to get bothersome. Pain in the ...

Hope your back improves and the return proceeds well. I really like inscriptions on books and even more annotations to the text with margin comments too. For me they show the provenance of the books. For me it adds immensely to the pleasure of reading reminding me I am the book’s custodian not owner ultimately.

The office and the back are improving thanks - mainly just a few little niggles at the moment.

It seems there are two schools of thought about inscriptions and whilst I can see the whole history thing it simply does not do it for me.

Horses for courses and all that!

Thank you old chap! It seems a little easier than a few days ago which is guess is a good sign.

I hope to be able to negotiate the climb into the man cave sooner rather than later!

Thank you re the back. I had not thought about the 'ultimate ownership' angle!