Warriors of the Steppe 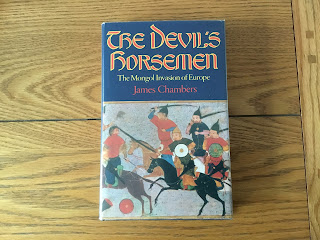 My back continues to give me grief. It tends to be worse in the mornings - presumably as a result of being upright after sleeping - and after a period of walking around (along with the ongoing ankle/leg situation). I have decided that getting on in years is not without its disadvantages from a health perspective! Seriously though, the back has dragged on for more that I would have thought so a trip to the GP will inevitably follow at some point. In the meantime the man cave is largely off limits, along with lifting and stretching so the great reading frenzy continues instead of modelling.

I first came across the book above during the mid 1980s (the book was originally published in 1979) and for the life of me I cannot think why I did. At the time I would have been far more likely to have looked books on the army of Attila the Hun or even that of Parthian/Sassanid Persia. In any event it is a cracking read and I remember being suitably inspired to think about raising a Mongol army for use under WRG 6th edition. As I recall that particular army featured a lot of Regular B cavalry….

I actually fought using a Mongol army against the Teutonic Knights whilst taking part in an impromptu all day DBA session in my garden using cardboard cut outs for the armies in the absence of figures. The Mongols lost. Fortunately Light Horse as a troop type has fared rather better under DBA 3.0 and so are better able to make use of their advantages in mobility.

One of the projects on my ‘to do’ list features the Crusades and of course the Mongols appear in this, if only on the periphery - not that the Mamlukes (another idea for an army I had at one time - there seems to be a common thread here - I really like cavalry armies!) thought so at the battle of Ain Jalut

I always intended using the block armies for periods other than the usual horse and musket games I have fought. In order to do this I have two choices. I can either design more block labels that would better represent the myriad troop types from the earlier (or later) period or I can use markers of some kind with the blocks as they are. I certainly have sufficient spare blocks for the former option but I am leaning towards the latter and producing a range of MDF tokens that can designate what the block is actually representing. For example, a bow and arrow marker could be placed on the block to designate that particular weapon rather than having separate archer labels. This is what I am currently planning for the blocks.

The Mongol Conquests had a lasting impact on much of the Middle East and I recall reading somewhere that the devastation visited on the region set back the development of Islamic culture by several centuries. How true this is I cannot say but certainly the impact of the Mongols was a major blow.

For my own part I like the idea of an army with superior strategic and tactical mobility that would probably not be out of place in a WW2 Panzer Division. Something to think about for the future methinks.

The last word should probably be left with Genghis Khan himself (allegedly):

“The greatest happiness is to vanquish your enemies, to chase them before you, to rob them of their wealth, to see those dear to them bathed in tears, to clasp to your bosom their wives and daughters.”

Sound words indeed, so sound in fact that Conan the Barbarian said something rather similar….

“To crush your enemies, to see them driven before you, and to hear the lamentations of their women.”