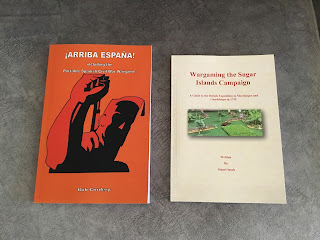 Two new additions to the library

I have just finished my first week back in the office and my back continues to fluctuate from bad to worse to actually not that bad - with the latter condition being firmly in the minority at present!

After a very restless and uncomfortable night in bed - I will not dignify it by saying that I slept - I was greatly cheered by the arrival this morning of the the two booklets you see above.

In addition to the two sets of rules there are a number of very well thought out scenarios - including a mini campaign based on Jarama - that are usable with either set as well as a useful bibliography.

I have to say that I really like the idea behind this latest adaptation of the Portable Wargame - having an updated version of a popular and more formal rules set with a degree of crossover into the PW ‘engine’ demonstrates once again that the core system can be happily ‘sliced and diced’ to suit one’s specific gaming requirements. A worthy addition to the stable and no mistake.

I have a modest amount of gaming history with the Spanish Civil War - primarily the naval side if truth be told - and whilst revisiting it as a going concern is not immediately on the horizon having this book would certainly give me a good choice of rules to use - along of course along with Trebian’s latest rule set: “For Whom the Dice Rolls” (which are currently on my ‘to get’ list). From a Portable Wargame perspective raising a couple of small forces to my usual size certainly appeals but it wold certainly be some way off.

Arriba Espana is available from Amazon and a big thank you to Bob Cordery for my copy.

Wargaming in the Sugar Islands Campaign is altogether a completely different kettle of fish. To begin with  it is not a set of rules but a guide to the Seven Years War campaigns involving the British and French on the islands of Guadeloupe and Martinique. The sugar islands were valuable but unhealthy places and the campaigns fought over the them (including the later French revolutionary and Napoleonic wars)  have suffered far more from various ailments - yellow fever amongst others - than from enemy action. There is a lot of potential for the type of small scale actions I enjoy - coastal raids and similar - so it is certainly something I could look at at some point.

Again, I have some history with the Seven Years War although my interest these days is far more likely to cover the far flung reaches of empire rather than mainland Europe. The French and Indian War, Clive in India and the operations in the Caribbean are of more interest to me although I have never considered raising armies for them. The booklet is available from the Crann Tara range now produced by Dave Ryan and Caliver Books.

The Crann Tara range of 28mm figures for the 18th century is absolutely lovely and was originally the brainchild of that all round decent fellow, Bon vivant, wit and raconteur, Graham Cummings, to whom I indebted for my copy of the booklet.

So have I signed up for yet more projects? The short answer is no, at least not in the immediate future to be honest. I will not rule either period out long term though - the idea of Portable Wargaming them is definitely appealing and indeed, I tend to look at pretty much any potential project through the lens of the Portable Wargame.

Many thanks to both Bob and Graham - these two booklets have been far more effective in raising my mood than copious amounts of Bio Freeze, Deep Heat and assorted drugs!

I would not say immediately shiny - more like just dug out of the ground and rusty but could be polished up - but there is some long distance mileage there for sure.