Block Changes or Why Didn’t I Think of This Before? 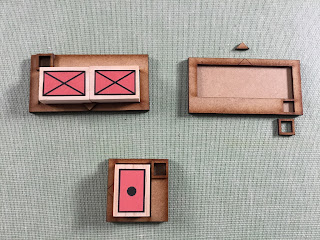 The three examples (best viewed ‘blown up’). The one on the right shows the constituent parts. The small triangle fits along the top edge (there is a triangle marked there) whilst the dice frame forms the edge of the pre cut square. I miscalculated this as I did not allow for the thickness of the frame itself as this should line up with the central recess. The thicker lower edge will have a strip of magnetic paper so that unit ids can be used.

In what seems like an age ago I mentioned about the plans I had to ‘pimp’ the block armies. Aside from the  ‘weapon’ counters (designed for the pre gunpowder and mechanised eras) I also looked at producing some movement trays that could be useful for games where a grid is not used. After some rather hasty designs were drafted and sent to those very nice people at Warbases, a small Jiffy bag arrived with some samples of what I was looking for.

Aside from a small error in the alignment of the dice square - easily rectified - these are just what I wanted. By using a combination of a dice frame and a reduced number of blocks (2 each for infantry and cavalry and a single for artillery) within the footprint of a movement tray I will not only have effectively doubled the size of the block army collection but I will also be able fight battles on a non-gridded basis. The small triangle along the leading edge of the base will be used to indicate the unit facing.

I plan to have two sets of these bases - one in green and one in a sand colour - and I am also planning one other design of base to complete the set up but for now I feeling pretty pleased with this latest iteration of the block armies. I am only peeved that I did nt think of this idea a lot sooner!

That’s a very clever piece of design, and should meet your block army requirements to a tee. It is a very simple, elegant, yet sophisticated way to create unit ‘markers’ that will look very effective on your tabletop.

Very smart. What do you paint the Mdf with by the way? it always look ghastly when I do it with a brush. Is a spray the way to go?

It strikes me that the facing arrow is merely ornamental, since the wider back side of the tray itself indicates facing. I'm having trouble picturing the size of the tray & blocks. Is the die tray for a standard sized die?

I hope your better half finds relief very soon, as does your brother-in-law. My brother fought a year long losing battle with cancer last year. Cancer is a merciless foe.

Those are very effective David. When all painted up they should look rather good:)

I was quite pleased at how these came out and they only need a very minor adjustment to be just right. Needless to say I have a few ideas about different ways I can use these!

I always seal the MDF - I have a sealer specifically for the purpose - prior to undercoating it as normal and then painting it as normal. I would be using a Humbrol satin enamel paint which offers a degree of protection and it looks fine.

Thank you for kind words - they are much appreciated.

It is ornamental for sure but I rather liked having this ‘front and centre’ as a kind of obvious focal point for the unit. I have some other ideas around the bases but for now will wrk with what I have.

They are simple but very effective looking and I am looking forward to getting the supply made up and ready to use as soon as I can.

It certainly is! I also need to tackle some new scenarios ideas as well.

Now that is a sexy look .. watching with interest

The slightly revised versions are on their way so when next you see them it will be the finished article.