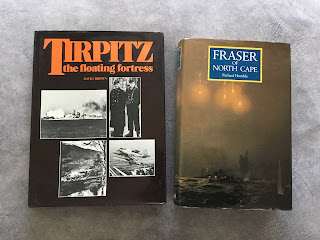 Two welcome titles for the WW2 naval section of my library. The Tirpitz needs little introduction as to her life and eventual destruction at the hands of the RAF so this is a nice account of the Bismarck’s sister ship. Fraser of North Cape traces the life and career of the man responsible for the sinking of the Scharnhorst as well as taking command of the Far Eastern fleet in 1944.

It is fair to say that the pickings at our local boot sale have been rather slim of late but today I was able to help restore a degree of equilibrium with the acquisition of the two titles above. Each of these are hardback first editions in good condition - no inscriptions - and cost me the princely sum of £1 each.

WW2 naval is not a new project for me by any means and I have a few ideas in a long distance orbit kind of a way - mainly involving 1:1200th scale ships just to be different….

Something to ponder and also a good excuse to dust off my copy of General Quarters (part 1) as well coming bang up to date with Find, Fix and Strike by David Manley.