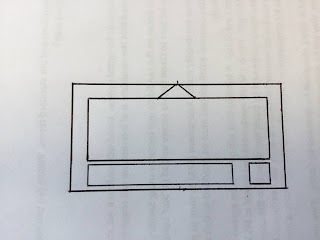 The initial design - note the facing triangle, the strip for a name label and the frame for a dice for recording strength points. Note the 'border' around where the block(s) fit. 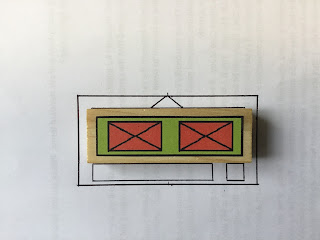 One of my original blocks - the space will take two half blocks easily as they are slightly smaller than a full sized version due to the saw cut when they were chopped in half.

I have had a bit of a rethink about the whole ‘tokens to indicate weapon types’ idea I mooted previously. I am not going to do it! A far easier idea would be to print off the appropriate symbols and mount them in turn on MDF bases - in this case 20mm diameter circular ones - which in turn would then be placed on the blocks forming the specific unit. This idea is how Command and Colours: Medieval indicates bow armed cavalry so if it is good enough for Richard Borg then who am I to argue?

This will be one half of what I am planning for the block armies with the other being something base related.

Some time ago I mentioned one of the problems I have with the block armies in that it is not always obvious which way they are facing. When using a grid based system this is not really much of a problem but could be when using them on a normal table top. I had considered using some form of standard deployed at the front of the block(s) in question but despite my best efforts I could never really get it to work. I have settled on a solution though, which I hope will further increase the potential of my block armies.

I am working on the design for a base for a single half block and one for a full sized (in this case that will usually be two half sized blocks) version. The bases are essentially movement trays but with a couple of differences. To begin with the two longer facing sides of the base (the blocks will be orientated with the long sides top and bottom) will be deeper than just the more usual ‘edged’ variety - 5mm deep along the top and 10mm at the bottom.. The top edge will have a laser cut MDF triangle fixed to the centre so that this will satisfy the facing requirement. On the rear edge I will have a dice frame positioned to one side leaving sufficient space for a strip of magnetic paper. The former will be to indicate the strength points of the unit whilst the latter can be used to hold a magnetic unit identity strip. All I would need to do would be to type out the name of the unit, print it out and stick to some magnetic paper which in turn will go onto the back of the base.

I would look to make two sets of bases - a green set and one in a sand colour and in terms of how they will be used the smaller base, holding a single half block, would be used for small detachments or similar - in the ‘modern’ era I would use this for infantry support weapons and such like - whereas the the larger base will be for a full sized unit.

To the purist the prospect of blocks on movement trays probably seems a little close to being a board game rather than a wargame but for me it represents something quite radical. By using these movement trays I will be able to consider using all manner of rules other than purely grid based ones.

The next step will be to get that very nice man at Warbases to work his magic!

I must admit I like the movement tray idea David. Working out how best to represent the unit facing is always tricky with blocks, hence my white dots at the front so I can remember which way they are pointing during the game.

An interesting and rather elegant solution! I trust that you’ll make some prototypes that you’ll share with the rest of us.

The overall size of this base is 3” x 1 1/2” and I will also be making a 1 1/2” square version for a single block. The triangle idea I am rather pleased about and wish I had thought about it sooner!

I am looking forward to seeing what Warbases can make of my drawing!

I am still undecided about the bottom edge of the base - the dice frame and the identification strip - but the rest of it works well enough. I will get Warbases to produce some samples once I have finalised the design and will post the results then.

It is a rathe neat idea though if I say so myself!

These look very similar to the movement trays I made for my 2mm and 6mm figure strips, except I put a square of magnabase on instead of a dice frame. Although in theory my 2mm stuff have faces etc, I really, really can't tell which way they are facing on the tabletop. Just having a tray with markers on the rear base edge fixes that.

Great minds (almost) think alike then! Originally I thought about marking the blocks in some way to indicate facing but was not really keen on the idea. Using the tray concept will get around the whole facing issue and so will help to use the block armies ‘off the grid’ so to speak. I am still undecided about the dice frame and label idea but will have a clearer idea when I get some of the bases from Warbases.

I still cannot believe it has taken me this long to come up with the idea!