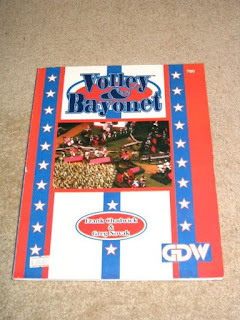 I have owned this in the past but sadly my copy when AWOL during the great lost box of books debacle. For me these are one of the most ground breaking sets of rules ever written and so I am delighted to have a copy once again. For the rationale behind the rules read Frank Chadwick's designer's notes

During my recent period of back induced inactivity I was able to spend rather a lot of time reading. I was able to catch up on a few new titles as well as revisiting some old friends. I have also had time to think about bits and pieces in respect of what I am gaming and what I am going to game (occasionally these are the same....) and more importantly how I am going to go about it. The usual outcome of this is that certain disposals and acquisitions are made and this time has proven to be no exception.

I really need to cull the collection in readiness for the inevitable downsizing when I retire - still five and half years away - so the mind needs to have a degree of focus. It would be easy to offload or dump material en masse if I wanted to but this would probably not be a good idea. Wargaming shelves abhor a vacuum and so seeing these in the man cave as the result of such a draconian culling would probably be all the incentive I needed to go hell for leather in some historical direction or another by way of refilling them. Clearly a more measured approach would preferential.

I reckon I need to reduce my book collection by around a half, probably more, say two thirds. The biggest other part of my collection seems to consist of items that are not immediately usable - there is whole lot of Axis and Allies gaming pieces as well as Risk Medieval figures. The block armies are fairly compact so are certainly staying put, as are the ACW ships and the planned other ships once they are built. I have a modest selection of terrain which will stay as will the modelling/painting materials.

As part and parcel of this ongoing process I will also need to focus on the periods that I shall be sticking with. This will have the effect of ensuring that the book collection stays within reasonable bounds and rather more focussed! 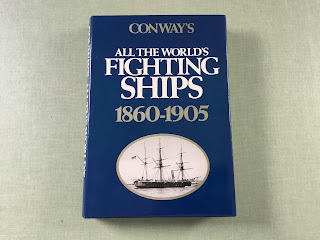 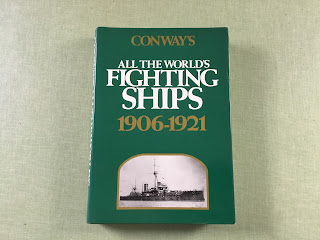 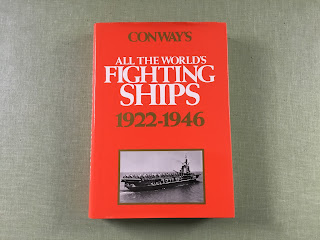 The holy trinity of naval reference books. These are very comprehensive and I have used them a lot but not for some time as I have other sources for the periods I am interested in - maybe not quite as technical but certainly more than adequate for my needs.

I have disposed of a couple of bits and pieces already but this will be, by design, a rather elongated process. Thus far a couple of board games have gone and this may come as something of a surprise, also my three volumes of Conway's Fighting Ships, covering from 1860 to 1946. The main reason for this is simply that I have most of the naval information I need dotted around other sources so I have little need for them. In truth I have not really used them a great deal  over the past few years so it made sense disposing of them. Hardcore naval gamers may despair at this apparent act of sacrilege but I feel pretty laid back about the decision!

I have had a rethink in respect of the block armies. I am going to use labels for counters rather than using laser cut tokens. It will be cheaper to realise and will look just as good if I use an MDF base with the appropriate label. All I need to do is the design work or I could even make use of some symbols found in various quarters across the web.

Volley and Bayonet, when originally published, absolutely blew me away in respect of the concepts presented - army level battles using brigades as the building blocks with whatever figure scale you wanted to use. My own copy vanished along with a box of books during one of my periodic reorganisations so I was delighted to get a copy once again.  These rules have been updated to be rather more period specific whilst still retaining the core mechanisms. You will probably not be surprised to learn that I already have a number of ideas to play around using these rules - some of which will be rather surprising but that is for a post at a later date.

Work on the ACW ships continues albeit at rather a sedate pace. Being back at work has impacted quite heavily as previously, whilst on furlough and working from home, it was easy to spend the odd half hour or so when needed. Now I am limited to evenings and weekends so naturally things will take a little longer back in the real world.

There are also a few ongoing domestic issues which are also taking time so my posting to the blog has been rather less frequent than usual and this is likely to be the way for the foreseeable future.

Still, one has to keep on keeping on!

Great to see you have finally got a copy of 'V&B' ! Can we look forward to seeing a game with those...?

I have a few ideas in mind including some that are slightly left field - I will be posting in more detail once I have sorted a few things out.

Absolutely delighted to get a copy once again and thanks for your help originally!

An interesting read David and on a subject that i have sort of tackled over the past few years. I'm sure lockdown has allowed us all time to really think about the games, periods and rules we play. I'm pretty settled on rules now which is good, ditto periods, so I too have quite a few books that really I have no use for or never really used other than skimming through them. This will certainly free up space and help declutter my gaming library which I find to be rather cathartic.

I've never played V&B but am glad you got a copy of a set of rules you obviously enjoy. Let's hope you can get some games onto the table, with your block armies or other wise as and when time allows.

It is rather unusual for me in that my reorganisations tend to be rather more short term looking, reactive even. This time there is, dare I say it, a species of five year plan in place. It will doubtless involve a lot of soul searching but the end result will be far more productive going forwards.

For the most part I have in mind the type of games I want to to fight and the periods I want to fight them in so it is really just a case of focus.

The block armies are going to feature in a variety of ways which is why I am so keen to upgrade them in readiness. The scratch building of ships will certainly remain and as for figures I am comfortable thinking about things from a skirmish level.

Volley and Bayonet will offer me another dimension and I have a few ideas for them that I have resurrected so watch this space!

If I am honest these days I only very occasionally refer to them as much of the detail I need for the periods I game I have from other, more readable sources. I have enjoyed owning them but no longer needed them.