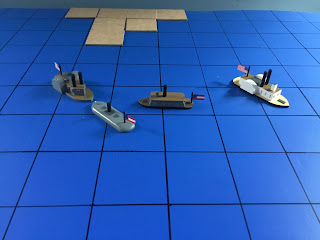 C.S.S. Manassas and Little Rebel (in the centre) engaging a pair of Union gunboats

I must confess to being hugely inspired by the work undertaken by the many aficionados of the Portable Wargame in respect of the ‘3 x 3’ variant, or, more correctly, variants. I am very keen to try a number of these out but given that Bob Cordery’s Portable Wargame Compendium will be featuring a veritable smorgasbord of ideas in this direction it would make sense for me to wait until it is published which means that I can instead concentrate on my own contribution - a naval version!

The 3 x 3 format lends itself rather nicely to naval actions that are fought ‘up close and personal’. In my opinion this potentially translates into pretty much any type of naval combat prior to the advent of the Dreadnought type. For now though, I am focussing on the ironclad era, or, more specifically, the American Civil War.

The 3 x 3 idea is designed to be very fast play which means that certain compromises are needed to be made in respect of the complexity of the rules in use. Once again my go to choice of rules to inspire me are both Bob Cordery’s Gridded Naval Wargames and David Manley’s Dahlgren and Colombiad. The challenge will be what to leave in in order to ensure that the end result retains the all important flavour of the period.

As an aside I remember reading that it is very easy to design a complicated set of rules but it is far more difficult designing a simpler set!

Whilst I am pondering the final shape of the rules the following are some of the ideas I have been flirting with.

The above are a selection of ideas I am currently playing around with and I reckon I am quite close to a first draft and a play test. Before I do that I will also need to furnish a suitable playing area and luckily I have sufficient material in stock to tackle this relatively easily.
I certainly have the ship models available….
In other news….
Initially I had planned to avoid the blog until next month but overall I am feeling a whole lot better in myself as long as I am mindful of my mental reserves and pace myself accordingly. Sleep continues to be an issue but again, as long as I take things steadily I am able to cope.
It has been a very busy couple of weeks since Laurel came home. We have managed to get settled into a kind of routine and the positive effect of having her home has also helped the rest of us as well as Laurel. At the present time and for the immediate future I would certainly need to be around on a full time basis and so I am currently negotiating with work to carry on working fully remotely for the time being. To be fully recovered from her surgery we are talking about 18 to 24 months so it is very much a marathon and not a sprint.
For sure Laurel has a long way to go but progress is steady although not as rapid as she would like!
Posted by David Crook at 12:45

Great to read that Mrs Crook is on the road to recovery.
Interesting thoughts on a Naval 3x3PW - can't wait to see the play test!

Thank you old chap - there is a way to go and no doubt there will be good days and bad but the overall trajectory is upwards!

I hope to be running a play test later in the week although I am currently struggling to pare the rules back from being overly complicated!

I’m pleased to read that Laurel is settled now that she is back home, and that you are caring for her so well.

I like the ideas you’ve set out for your 3 x 3 naval wargame rules, and I hope that you will be able to find time to work on them.

Many thanks old chap - much appreciated although Laurel may have something to say about my wheelchair manoeuvring skills!

I am trying hard not to over think the 3 x 3 rules and perhaps unsurprisingly it has given me some ideas for my ‘big brother’ version.
All being well I should be able to give them a run out later n the week and this will feature on the blog when I do.

Good to hear things are getting better. I'm looking forward to seeing more on your navel game.

Many thanks old chap - there is a way to go but we are moving in the right direction.

I am hoping to be running a play test later in the week and it will certainly be up on the blog. I have a few ideas to tidy up but reckon I am more or less there as far as the rules go and I certainly have sufficient models to play around with!

What is next is organising a playing area but that is now in hand.

PS It has been a whirlwind keeping up with your 3 x 3 journey but it has all been hugely inspiring! Well done that man!

Good to hear you are improving David, which is great and hopefully the lovely weather this week will help things too. Nice to know Laurel is making steady progress, but not as fast as she might like. These things take time and it took longer for my hernia repair to heal and feel normal than it did for my prostate op. Patience is a virtue but admittedly hard at times when you just want to get back to normal.

Good to see you back online and in the vanguard David!

I'm really pleased to hear that Laurel is doing well - from my own experience, dealing with something like this is difficult for everyone involved. My won advice would be to try to keep a little time for your wargames interests - it certainly helped me to 'keep sane' a few years ago

All the best
Ian

I'm glad you are feeling better and that Laurel is on a path to recover. I look forward to your 3x3 Fast Portable Naval Game reports.

I really enjoyed reading about building ACW ships and the battle reports.

Great to see that you and your Missus are at least over the hump and on the mend. But in the long haul sometimes things you normally love doing can seem like a chore - so you have to pace yourself.
The 3x3 naval concept sounds intriguing. I'm wondering whether to add to the Byzantine dromon I made about 30 years ago... I have thought of an addition to Mark Cordone's 3x3 concept with rear and flank areas...
Cheers,
Ion

Welcome back, David! Glad things are improving at home, and I look forward to seeing how this project goes - you are very much the man for the job!

I think the enormity of Laurel’s surgery really took us all by surprise and so there was a lot of adjusting to the new regime whilst she recovers. It will all come good eventually but there is a long road with the occasional speed bump to tackle I am sure but we are heading onwards and upwards.

I guess that normal is as normal does!

Cheers buddy - it is good to be back and on a (mostly) even keel!

I have felt rather more like nibbling away at a few gaming related projects now that the dust has settled somewhat. The whole 3 x 3 thing is an excellent tonic for a weary spirit!

Thank you on all counts!

I still have a few models to finish but rather unusually for me I have the models ready to go for this project rather than having to think about making them!

What a novel turn of events….I really ought to do this more often!

Many thanks old chap and you are absolutely right - pacing oneself is the key!

Definitely adding to the Dromon would be a good idea and like you I am thinking about making use of the rear and flank areas for 3 x 3. I am also looking at the corners….

It will be a long road for Laurel and all of us but the journey is underway and once we clear the traffic we can make some progress.

I am rather excited about a naval 3 x 3 game and for a change I have the models ready to go - usually it is the other way around!

Good to hear things are brightening up for you. A bit of hobby time must be a great relief. Good on you!

Mind how you go!

The all-pervading doom and gloom has lightened for sure although there is a long road ahead and I am certain that we shall come across a few potholes en route!

I have actually felt like doing something hobby related and the benefit to my wellbeing has been immeasurable. However, careful pacing is the key!

Good to see you posting again and to learn that things are becoming a little easier at home. The good weather must be helping too! Looking forward to seeing how your naval actions evlove.

Dabbling in a small way is certainly proving to be beneficial - I am even thinking about future projects which is always dangerous….

Our ground floor does seem rather like a large scale Scaletrix track at the moment - luckily the cats appear to be unfazed by the trundling of wheels!

BTW - I used to own a copy of the book you mentioned on your blog and it is a real treasure - at the time I was going through a ‘Last Valley’ 30 Years war phase but as Michael Caine said in the film “Good ideas are hard to find!”

It has been a whirlwind for sure but we seem to be getting the measure of it. It is going to be a slow process for sure but the overall trajectory is heading in. The right direction and yes, the weather has helped enormously!

I hope to have a try out of my 3 x 3 ironclad rules over the weekend - I just need to write them up and cobble together a playing surface. For a pleasant change I do not need to think about getting the models ready for it!