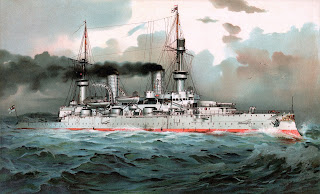 A German Wittelsbach class pre dreadnought battleship S.M.S Kaiser Wilhelm II. Although armed with 9.4” guns compared to the 12” guns of contemporary Royal Navy battleships it was felt that the increased rate of fire of the lighter weapon would offset the larger British weapons at expected battle ranges. It was for this reason that the German ships tended to have a weightier secondary and tertiary armament

OK, I will be completely honest and admit that I have spent rather more looking at pre dreadnoughts than perhaps I should have! Aside from now being further convinced that it will be a good thing for me to tackle it has thrown up a rather delicious dilemma. I will go into that in more detail further down the post but before I do I wanted to throw in a quick ACW update - a ‘state of the Union’ address so to speak.

The rules, which are currently with the testing team - agents X and Y - have been turned into version 2. This is very much a halfway house as there are still some areas that need clarification and I am sure that a few other anomalies will be thrown up. I will stick my neck out and say that I am pretty confident the core system is sound but there is much in the way of player based testing polishing to be undertaken. I was scheduled to take part in a Zoom game this evening but as I had just finished version 2 of the draft based on preliminary feedback I figures it would make rather more sense using them for testing. We go again next Wednesday evening.

Work has resumed on the ACW ships but I am fully expecting to hit a snag with the current batch. These are paddle steamers but with the paddle covers being the more usual vented type - you know the kind of thing, the sun ray style effect that many of them had. I had ordered some of these to be custom cut by Warbases and they duly arrived but were not quite as I envisaged. I was hoping that the ‘rays’ would be cut right through the MDF but instead they are etched into the surface. I am really not confident in my ability to carefully ink these in but will give it a try. One idea I had would be to use a really sharp pencil and essentially fill in the etchings with graphite - failing that some Nuln Oil. I will see how it goes but reckon this is one of the reasons I have dragged my feet with these for so long!

The Russo Turkish set up is looking more and more like a hypothetical match up in the mid 1880s. I will have the vessels I need for the actual war itself but I am fleshing out the Russian fleet to give it some heavier metal than it had historically. At this stage I am thinking elements of the Baltic fleet and naturally the Royal Navy will have a representative squadron. I am pretty confident that once I have built the last of the ACW models completed the Russo Turkish set up will be pretty straightforward to organise as I have a lot of the bits and pieces I need already. This is all rather lovely and leads me nicely into the pre dreadnought project and the plan before the plan before the plan. 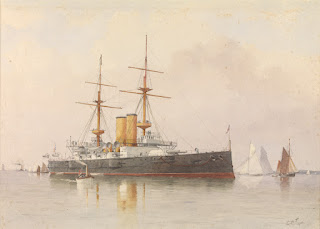 H.M.S. Canopus, a contemporary of the Wittelsbach class above. Designed with overseas service on the China station the class  carried lighter armour and were both smaller and faster than the preceding Majestic class.

I have been looking at a lot of pre dreadnought era vessels from battleships down to torpedo boats and it has been a rewarding and enjoyable experience for sure. My dilemma is a simple one. Initially my plan was to model some representative second string, colonial style forces for five nations - Britain, France, Germany, Russia and Turkey. At first glance this would appear to be wildly ambitious but in actual fact as I am looking at small forces for each - say a dozen or so vessels - the entire set up will be around the same size as the ACW collection. I would also be building in matched pairs as far as possible so the British would be built alongside the Germans, the Russians with the Turks and the French would be separate. There is an alternative that has been tempting me though and is the cause of the dilemma mentioned.

I have been giving some serious thought to going full on ’imagi-nation’ for the pre dreadnought collection.  Of course this will mean coming up with two or three ‘imagi-nations’ to begin with! This I have no problem with and naturally from the modelling perspective it would give me free rein as to what I want to build in terms of designs etc - either actual historical types or ‘based upon’ interpretations. There is plenty of choice in this regard.

The historical option is very much geared towards colonial considerations which in my world invariably means Madasahatta. As an aside Bob Cordery has released a slightly revised version via the Wargames Vault as a PDF. I say revised as he has added his updated and coloured versions of the original maps which are worth the cover price alone but then I am probably biased! I wholeheartedly recommend this work - he has also added a number of his other titles to the Vault as PDFs - as being a great example of how an old school style campaign was organised and run. It was very much Eric Knowles’s baby and is chock full of irreverent and politically incorrect ideas - think of it as a wargaming version of a Carry On film and you will get the general tone of the content!

At this stage I do not have to make any decisions about nationalities, fictional or otherwise, but it certainly does not hurt to give it some thought. For now though all I shall be doing will be designing some essential MDF pieces for when I do pull the trigger. Hopefully by the I will have a clearer idea of what I am will be doing and more importantly, why!

Hi DC, sounds like you have a plan ! - heartily approve of the idea of Imagineering some Imaginations - reminds me of my work with the Minifigs/BMC ships……. (Thanks to your generous gifting) - You’re welcome to hijack/use the titles of mine if you fancy - The Republic of Risorgimento (Italy) and Bostro-Danubia (Austria) if you like - no copyrights involved !

David, as a suggestion for shading the paddle covers - why not try some of those very fine technical drawing pins that you can get at most stationers these days - the modern disposable equivalent of the old ‘Rotring’ drawing pens. You can get them in various line thicknesses, with some very fine indeed! I use them for ‘blacklining’ some of my Peter Laing figures and equipment. The ones that I use are from a maker called ‘uni-pin’
Ian

Gosh! I had forgotten all about those! I was thinking of resurrecting my Balkanesque set up - Balkrunia for one side with something Ottomanish for the opposition. I may even tap into Bob Cordery’s World of 1891 but I have plenty of time to think about it. For now though, I shall look to get he bits and pieces designed and ordered from Warbases so that I will be good to go when I do eventually pull the trigger.

That sounds like it might be worth a spin. At one point I was considering drawing the required shape using MS Paint and printing the design on to a self adhesive label sheet and sticking them on the model! I will take a look at the great South American river and see what they have!

All the best and thanks for the (fine) tip,