New Additions to the Fleets 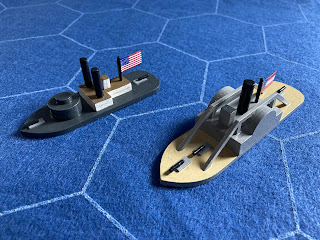 The U.S.S. Ozark (left) and the C.S.S. Selma - the latest additions to the collection

As a slight break from the previous six posts in which I described being at the final stages of the ship build and then went through various permutations of what needed to be done and when, I have last gotten off the mark with some completed models. In truth the previous six posts were probably not the most inspiring of reads BUT - definite progress has now been made and the fruits of this you can see above. 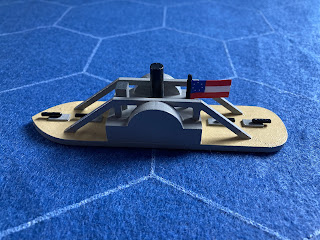 C.S.S. Selma showing off the substantial supporting framework designed to maintain the structural integrity of the hull 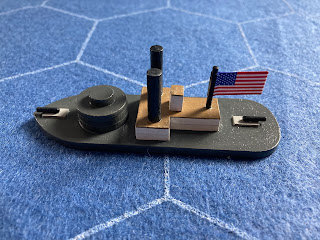 The U.S.S. Ozark - a monitor with benefits….

I rather enjoyed building these and am rather pleased with how they have turned out. For the C.S.S. Selma the supporting frames were commissioned from those wonderful people at Warbases, as was the superstructure for the U.S.S. Ozark.

The next nine models all have masts - luckily they are built - but the plan is to tackle the next four over the weekend.

Things are moving along at last!

Many thanks old chap! Still a way to go - 16 in fact - but a big chunk of what is left is well under way. There should be another four finished over the weekend.

Lovely looking ships David.
I particularly like the Selma.

Lovely additions to your fleet Admiral!

Great and unique additions to your fleet. Well done!

Thank you kindly sir! The Selma came out rather nicely although is perhaps a little ‘heavy’ looking. Mind you, so are all the other models in the collection so it is in good company!

Cheers mate - much appreciated although I am not sure if I warrant the promotion! :-)

Hope all is well with you and say hi to ‘Right Stuff’,

Thank you kindly sir! I wanted to tackle the Selma as the final model for the project (at least this phase of it) but was so tempted by the odd look of her that I was unable to resist pushing her up the queue!