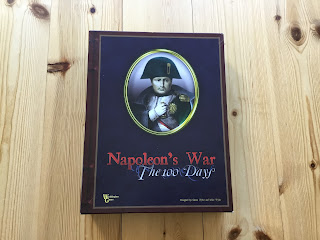 Worthington’s Games take on the Waterloo campaign of 1815 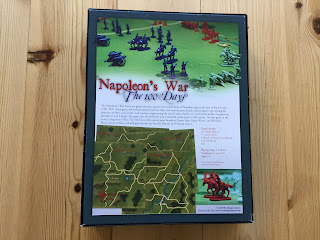 The rear of the bo which should give you a flavour of what is to come
The 1815 Waterloo campaign is one of my perennial favourites with a fondness for it going back to the days of Airfix armies, Bruce Quarrie’s Airfix Magazine Guide and THAT film. There is something about it that never ceases to inspire me although in many ways elements of it have always remained tantalisingly out of reach - primarily I suppose because despite all of the ink that has been spilt over the years about the campaign and the battle we only have a series of educated guesses as to what happened and when. I have dabbled with using figures and played numerous board games on the subject over the years and even attempted a version using Waddington’s Campaign as the basis. I also nearly took part in a 54mm Little Wars inspired refight so it is safe to say my interest in Waterloo is well established.
I noticed the above game advertised on one of the Facebook Marketplace groups and so I immediately made a beeline for it.
The game uses a system that is very much Command and Colours light in that there are similarities to Richard Borg’s design but without the use of command cards. Instead of blocks there are three armies made of up of generic looking figures presenting infantry, cavalry and artillery made from hard plastic and scaled at between 15mm and 20mm. The armies are red, blue and grey and I am pretty certain that a follow up volume included the Russians in Green and Austrians in white. I also believe that there was a standalone expansion book that covered the war in 1812 against the USA. I will check BoardGameGeek later for confirmation. The game contains map boards for Wavre, Ligny, Quatre Bras and Waterloo itself. There are also some counters for use to differentiate troop types - skirmishers, heavy cavalry, horse artillery, that sort of thing - as well as for the three main commanders. The rules are very straightforward and games are expected to take between an hour or two. 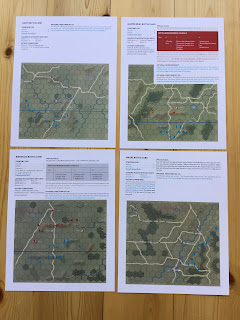 The scenario cards - note the reinforcements for Quatre Bras and Waterloo…. 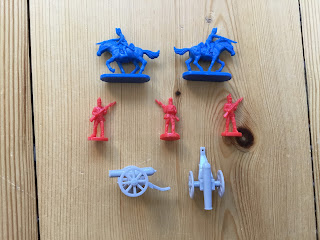 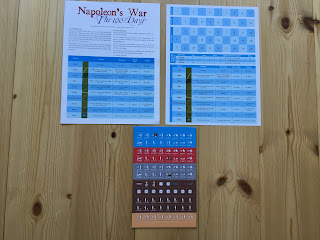 The rules, play sheet and the counters.
The use of generic troop types means that the figures (120 in all) would be eminently suitable for a Portable Wargame style set up and when used in conjunction with any of the commercially available plastic figures for the period a pretty nifty set could be raised. I am not about to do that anytime soon but it is handy to have the wherewithal if required. In the meantime though, I will be able to easily get my Napoleonic Waterloo period gaming fix in a simple but effective way.
Certainly this is one I am pleased to have in the collection and I will look to try and tack down the expansions etc in due course.
Posted by David Crook at 14:06

That is a great find … and I am very envious! It looks like a good game and the figures have all sorts of uses.

I’m tempted to try and find a copy myself.

If I can get a copy of this game, perhaps we can find a way to play it online against each other.

The game uses the ‘Hold the Line’ system that has also been used by Worthington Games for the Jacobite ‘45, the French and Indian War, the Seven Years War, the AWI, the War of 1812 and the ACW. It is a simple and neat system to use without command cards. I was very pleased to pick it up for sure!

The figures are crying out to be used for something so i will take a good look in due course to see what that might be!

Absolutely! Given the size of the game it would seem to lend itself well to online use. I will take a closer look at the maps and will report back.

I have never come across this game or the others you mention to be honest, it really looks very interesting and a very nice set. A very nice purchase indeed!

I was rather pleased to get it and hope to scratch my ongoing Waterloo itch at some point. I will try to find the other set for completeness.

I found a copy on sale on eBay, and I’ve snapped it up.

I’ll let you know when it arrives.

Great news! Best I dust off some of my Waterloo library - purely for research purposes of course (and I might even sneak watching the film in again!).

I am going to try and get the Russian campaign version but I am not expecting it to be easy.

Anything that has Waterloo somewhere on the box or cover will usually get my attention! It is a straightforward system and great for a quick pick up and put down dose of Napoleonic goodness as and when needed.

Hi David -
Those battleboard look just very slightly larger, in terms of the hex arrays, than my hex battleboard. With a little cropping of the flanks the fit would be perfect. For my own 'Hundred Days' project over the last few years, I oriented the hexes the 'other way' though - the 'grain' going across the board, instead of along.

The 'Worthington' game system is further indication (if any were needed) that the Portable Wargames system is quite adaptable - with a suitably sized board - to large battles such as Waterloo.

I will try and get some decent pictures of the map boards organised so you can take a better look. After a little research I think that getting hold of a copy of the Russian and Austrian set would be nice but I suspect difficult to get hold of. There are some minor changes to the rules in the Russian set that make the game better so even if I could only get a copy of them it would be handy.

The rules are pretty straightforward and as you rightly say, along with the Portable Wargame are readily usable for large battles.

Something else to think about - along with ACW ironclads and Samurai!

Looks like a fun game. Incidentally the figures are those replacement Risk pieces which only seem to be available here in the states.

I noticed they were similar looking. They are certainly very usable and it is shame we cannot easily get them on this side of the pond. The only disadvantage is both sets and the two expansion packs only feature historical battle maps. There are no separate terrain tiles like in Command and Colours Napoleonics for example. The hexes are 40mm across the flat sides so making something on a custom basis should not be too difficult but that would a project for another day in my case.