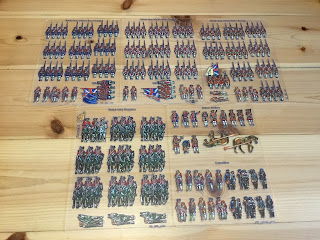 The Government contingent. Three regiments of foot, a regiment of Dragoons and the gun crews. There are also a few casualties as well - handy for recording losses or morale status etc. 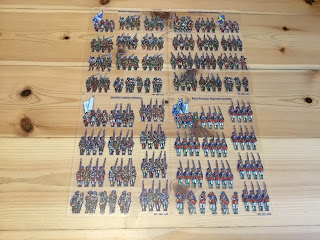 The Jacobites. Two sprues of Highlanders, one of Lowland infantry and the Royal Ecossias Regiment.
There is something about the Jacobite Rebellion - in this case the ‘45 rather than the earlier versions - that has always struck a chord with me. I think it is once again the idea of asymmetric forces using differing tactical methods that appeals along with images of wild Highlanders rushing down heather-coated slopes into nervously waiting government soldiery that has ticked a number of boxes. Of all the periods of military history I have looked at over the years this is the one that I would most certainly never paint figures for - at least not in anything larger than 10mm and even that would be at a push!
The WoFun 28mm Jacobite Rebellion 28mm starter army with artwork by Peter Dennis is a thing of beauty for sure. I have pretty much everything I would need figures wise although as with the ACW collection, there are a couple of other bits that I may want to add in due course. As projects go it is a little way off but I thought it would be good to take a look at what there is and more importantly, think about revisiting the Jacobite Rising section of the library - currently consisting of a couple of biographies of James Wolfe. With SELWG coming up on Sunday - my last show for the year - I will be swinging by Dave Lanchester’s book emporium to see what he has that may be useful.
As with the ACW collection I spent some time going through the box and for sure a few additions will be needed to make the collection more usable. Certainly a personality sprue as well as some artillery - I currently have government gunners and some draft horses but no guns (not that I would need many anyway). I would be keen to bolster the Highlanders as well. All things in time though and given the issue of shipping and customs etc I am happy to wait until I have worked out what I need for both collections and so can do the order in one fell swoop.
In the files section of the Portable Wargame Facebook group there are a few ideas for me to play around with when I get to it but there are a few other projects in front of it so tables full of kilt-wearing marauding  Highlanders are some way off at the moment but there is no harm in taking a look.
A number of year ago I was away on business in Edinburgh and stayed in modest hotel a stone’s throw away from the famous castle. In the hotel reception area there was a rack of tourist leaflets for various events in and around the castle and the city. My eye was drawn to a couple of leaflets describing a pair of living history talks that took place at the castle on a daily basis. These were both about the ‘45 from the perspective of a rebelling Highlander and a government redcoat. In each case the person delivering the talk was in period costume so there was a fully equipped Highlander with musket, broadsword, dirk and all the other associated paraphernalia and a very snappily dressed government redcoat, again with all the trimmings. I never went to either, my schedule did not permit it, but I was struck by one thing. The Highlanders talk allowed two hours whilst that of the redcoats was a mere 25 minutes or so….
Posted by David Crook at 07:55

David,
You know I’m a fan of Wofun (mainly their 18mm) as a pretty cost effective way of gaming periods we haven’t got the time to prepare armies for. The two things I do is colour the clear edges using a pigma dark brown brush pen and I hate the artillery pieces ( I do use them reluctantly ) so I usually replace them with metal ones. Enjoy this.

I am also not a great fan of their artillery pieces! For the ACW I may use the carriages and just add a gun barrel - similar to the ones I make for the ACW ships. I might even see if a friendly manufacturer would be willing to sell just the barrels to me.

A gaming friend of my used GW Agarax Earthshade ink to go around the edges of his AWI WoFun and it looked really effective - he also matt varnished them and painted and flocked the bases. They look really effective.

The ACW collection will come first as there are some holes that will need filling in the Jacobite collection first.

All the best and great to hear from you following your recent surgery,

These are much more my ‘cup of tea’ and I have been drawn to the various Jacobite rebellions over the years. I have quite a few books on the subject, but like you, have never gamed it. My friend has 18mm WotAS figures by WoFun, I know what you mean about the artillery.

I like them a lot!! I am building armies in metal for both, a long project, but these would be great for diving straight in, they are really lovely and you could build up decent forces quite quickly I would think, shipping etc aside.

The appeal for me is of the asymmetric nature of th forces involved and the differing tactical methods. My library has waxed and waned with books on the subject over the years and so I need to rebuild it again. I had hoped to make a start at SELWG but sadly it was to to be.

In any event it is a project for next year so there is no immediate rush. I will also have some time to think about the artillery as well!

They are very nice and for all the reasons you mentioned. Hopefully the WoFun team can secure a produced under licence deal in the UK, thereby saving a world of pain in respect of shipping, customs etc.