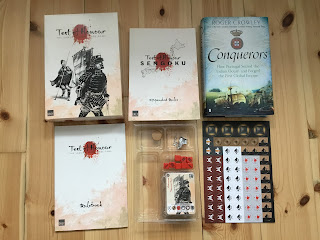 The haul. I opened the box for the Test of Honour upgrade - the unarmoured Samurai figure contained therein is really nice - so that you can see the contents. Note the book (top right) for which there is a related cunning plan….

First of all I have to say that it is far easier getting to the Lea Valley Leisure Complex than it ever was going to Crystal Palace! Fifty minutes door to door - a quick dash down the A127 followed by the M25 and voila! When I arrived there was a bit of a queue but nothing major. I was in shortly before opening at 10 and the first order of business was organising some trade for Dave Lanchester courtesy of David Carey, a good friend of David in Suffolk. Once this was taken care of I was unleashed on the venue and able to have a good mooch about as well as catching up with old friends, the first of which was Tamsin P!

The venue is fine and the mix of trade and games felt about right. There seemed to be a lot of people there - the bring and buy was mobbed - although a lot of traders said the gaming public were being very selective about what they purchased. A sign of the times methinks.

I took a few pictures and managed to catch up with Messrs Fox and Harbron from SEEMS who were busy fighting the Battle of Britain using Axis and Allies: Angels 20 and my old friend Chris Hardman who fighting a Peninsula War skirmish using Sharpe Practise. Another old acquaintance from the Newham Wargames Clun days - Derek Oram - was taking part with the Lardies ‘O’ Group WW2 rules, fighting a very nice looking Kursk inspired Eastern Front game.

I only had two hours available so it was a real race to get around but I managed. The retail haul was very modest - the second edition upgrade for Test of Honour (the Samurai Skirmish game) and an expansion for the same with some additional scenarios as well as historical clan orders of battle. I also picked up a copy of Roger Crowley’s book Conquerors covering the formative years of the Portuguese overseas empire. Methinks there may be a game in there somewhere.

The following is a selection of pictures from the show. 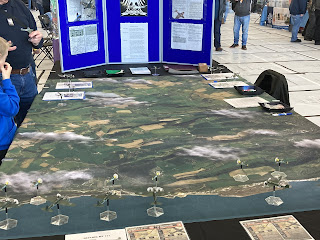 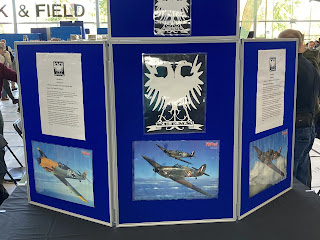 The game blurbs etc together with the SEEMS crest. 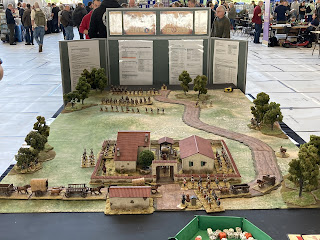 A Napoleonic skirmish set in the Spanish Peninsula…. 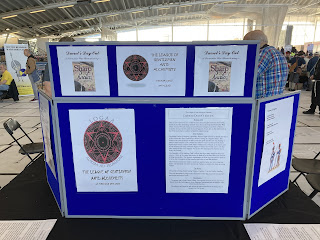 ….organised by the The League of Gentlemen Anti-Alchemists featuring my old friend Chris Hardman. 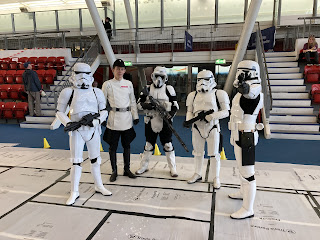 The Empire striking back…. 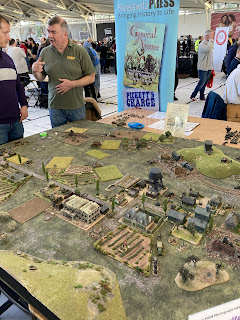 ‘O’ Group on the Russian Front
All in all it was a good, albeit rushed visit but really worthwhile and I came away suitably inspired by the games on show and meeting up with many old friends.
….
Posted by David Crook at 19:55

I missed SELWG because I had an online WD committee meeting about next year’s COW followed by a trip with Sue to Charlton House to meet the archivist in charge of Greenwich’s archives. Sue has been trying to get access to them ever since they were moved from their previous base on Woolwich Arsenal to a storage facility in Charlton … on an industrial estate! It has no facilities for visitors, and - as we discovered today - the archive was moved without any input from the archivist and just put on shelves without being catalogued. As a result, they have great difficulty finding anything.

It looks as if you had a great time, and the new location was much easier for you to reach. I must admit, the Lea Valley is on my way to Cheshunt, and would probably as easy for me to get to as Chrystal Palace … and was probably a nicer venue. It certainly looked it.

I always enjoy reading and seeing show reports, living in the far north of Scotland they are always a step too far so I always like seeing different takes as everyone has their own thoughts.

Nice one Dave, shame we couldn't make it

A nice looking show David…
And you were very restrained with your purchases.

That Archive situation sounds very like something I had to sort out many years ago at an Iron Mountain stormer depot for the bank I was working at! It took a team of six of us around three weeks to get any kind of order into things! I hope that progress is being made at last though.

The new venue for SELWG is light and airy and with everything in easy reach. If I am honest I am thinking that next year it will be a lot busier which will reduce the positive aspects of the venue but it was a great show to wander about in with the right balance of games and trade. It was good to catch up with some gaming friends and a modest retails haul made it a great day.

It was my second of the year and thoroughly enjoyable despite only being able to stay for two hours. It was also a lot easier to get to from where I live - around fifty minutes door to door.

I expect you have still to recover from the Other Partizan! It was a good show and felt just the right size with a nice mix of games and trade. The Bring and Buy was massive and the crowd was three or four deep for the most part.

It was a very pleasant way to spend a Sunday morning and the retail therapy was quite restrained for sure. Both items were on the ‘to get’ list so no impromptu purchases.

I did see some nice Sash and Sabre unpainted 40mm ACWs in the bring and buy and thought of you though!

Glad to see you being able to get to another show and not too far from your door, even if it was only for a quick visit. Not sure whn my next show might be, most likely Colours next year!

Good to see you enjoyed the show, even with limited time it’s nice that you came away enthused and with some new toys. I’m setting my stall out to go to the Battleground show at the end of November,

It was well worth it and I am pleased I made the trip. I have not been to Colours but who knows? Maybe one day!

It was a quite inspiring whirlwind visit - nothing in particular but the overall ‘vibe’ was very positive and as I drove home my thoughts were filled scenery ideas for the forthcoming Samurai project - there are some lovely MDF buildings and bits and [ieces available.

I have not been to Battleground - sadly my wargame show passport does not have many stamps in it!

When I lived in (North) London I slogged all the way down to Crystal Palace once for the show, never again! The Lea Valley sounds much better, glad you had a good day out.

Cheers David, sorry not to bump into you , anyway Dave C was happy to shift those books! We had a nice chat with the SEEMS guys over their great-looking Battle of Britain game, I really liked the 1/144 scale planes.

I only ever went to Crystal Palace once - and that was enough! As I recall it took me twice as long to get across South London as it did to get to the city in the first place!

Lea valley is easy for me to get to and the venue is a vast improvement. I hope that it can remain there.

I was sorry to miss you but I was on a tight schedule - more so than usual. I am pleased to have been able to help Dave C and will contact him later. The SEEMS Battle of Britain game is great to look at and the rules are good fun to use for a dramatic and usually eventful game.

1:144th is a good scale for this for sure with the right balance of detail and usability.