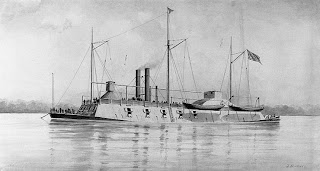 As mentioned in my last post I have now started on the three Cairo class gunboats for use with my Hexon terrain and, initially, Bob Cordery's 1860 to 1870 variant rules for Memoir of Battle at Sea. Thus far I have got the models up to the 'completed casemate' stage so what I need to do now is the fitting out. As usual this will be the gun ports, funnels, pilot house and the wheel house. The pilot house will be a challenge as it looks almost like a limpet shell and as yet I am uncertain how I will model this. The overall look of the model will be about right although they will stand slightly higher than a true scale representation. As these are basically casemate ironclads the building technique is now fairly straightforward and so getting the angles and corners to marry up is no longer as daunting! I will have one more casemate based model to construct - the USS Benton (see the picture above).
I have already been looking at the various types of sidewheelers used and am looking forward to tackling some of these - mainly for a change - and I am confident they will be easier to make. Mercifully covered paddle boxes seem to be fairly common and I have a cunning plan for these.
There is also the small matter of monitors - I will need a few of these but will have to experiment with the turrets first.