Back in the Construction Business via Narnia 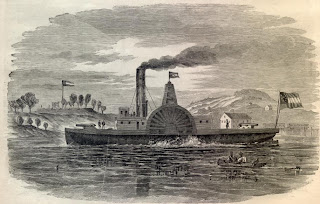 After a day of Xmas activity - including a visit to the cinema to see the new Narnia film (more of which later) - not helped by the second downfall of snow; I was able to get some more work done on the gunboats and rams for the ACW collection. Looking through my copy of Gibbon's Warships and Naval Battles of the Civil War you can see that there is an absolutely bewildering variety of ships pressed into service on either side, all with a greater or lesser degree of protection and weaponry. This gives the scratch builder almost a blank canvas upon which to work as for every documented and illustrated ship there is probably a dozen that we have no idea about! I will be making models that are best described as typical of their types, rather as I did with the casemate ironclads, and so the naming of these models will be an exercise in educated guesswork!

Last Wednesday was my daughter Holly's birthday and as part of her celebrations we went to see the new Narnia film - The Voyage of the Dawn Treader. I must confess that aside from The Lion, the Witch and the Wardrobe I was unfamiliar with rest of the Chronicles of Narnia but judging by this film (and the previous: Prince Caspian - we watched this a couple of weeks ago as my daughter has the DVD) I may well have to rectify this omission as it was great fun. I was aware of C.S.Lewis being great friends with Tolkein but I have never read any of his works. Happily my daughter has all of these so I will be borrowing them from her - all in the name of research of course!
Posted by David Crook at 15:36