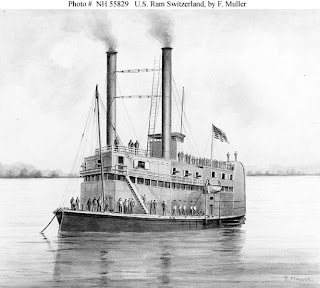 The picture above is of the Ellet Ram USS Switzerland which, with her 'sister' ship USS Lancaster are currently on the construction table together with a further Ellet Ram, two copies of the Queen of the West (both sides used her, rather like the General Price), USS Vindicator and the CSS Webb for 7 models in all - all being side wheel rams. I hope to have all these finished in the next day or so - SWMBO's birthday festivities permitting!
This particular ship was what I would call a 'double decker' steamer in that she had an extra deck which gives her that rather imposing profile. Quite what all the artillery on the top deck would do the vessel's stability is anyone's guess!
The model has presented a couple of challenges which I will describe when they are finished in the inevitable photo shoot - nothing major, merely an exercise in right angles.
Posted by David Crook at 13:29