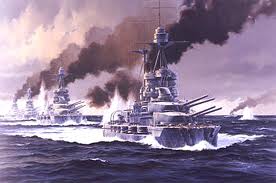 HMS Barham opens fire
The 'Jutlandisation' of my 1890 to 1920 naval rules is more or less complete and the first play-test will take place over the weekend. The process of expanding the existing Tactical rules for the Avalon Hill game has been pretty straightforward and I like to think this is due to the basic robustness of James Dunnigan's original design from way back in the 1960's. In fact, all I have had to do is to 'hex' the rules and to add in the use of secondary (or even more) batteries of guns and split out the Light Ships category into individual ships for light cruisers and destroyers.

Guns types have been classified as per F.T. Jane's system of rating which has in turn determined the ranges I have used. Within the board game ranges have been rather generically lumped together by ship type which is fine for the Jutland scenario itself, less so when you start using more varied fleets - especially with some of the older ships in use.

I will not be using Jutland style turret layouts - the damage charts from the game use a top down view of the turret layout for main gun hit boxes - but will split gunnery factors between port and starboard as required. I have not designed a ship record chart for use with the rules as such but will experiment with a few before the test - the main thing is that the data to do so will be in a easy format to use.

Combat mechanics have been left as per the original game rules aside from the changes in ranges mentioned earlier and the incorporation of the 'hex factor'.

As usual (and especially after the last fiasco!) I will complete an after action report and with the obligatory photos for the blog once the smoke has subsided.

The accompanying ship specification charts have (at last) settled on the format I shall be using and these will incorporate not only the game stats but also the historical data from which these have been derived.

....And work in the swampy bayous has been resumed, albeit in a slightly different fashion than normal....;-)
Posted by David Crook at 06:01