Setting the Scene for a Play Test

In advance of my play test tomorrow of the revised Naval Wargame rules I have been giving some thought to the scale of action I want to run, as well as the choice of combatants. Initially I wanted to use the Russians and the Turks by virtue of being able to include some dreadnoughts on either side but I have decided against this and will instead head for the Aegean Sea which of course means the Greeks.

The scenario I have in mind is a 'what if?' but is based on an actual plan the Turks devised to hopefully isolate and destroy the armoured cruiser Georgios Averoff.

The Greek armoured cruiser - Georgios Averoff, as she is today
The plan was very simple and involved the Turkish cruiser Hamidiye being offered as bait by cruising around the Greek coastline and making a nuisance of itself by bombarding places and generally causing inshore mayhem. Lurking over the horizon would be the might (?) of the Turkish navy which would spring the trap should the Averoff venture out to tackle the offending Turk. 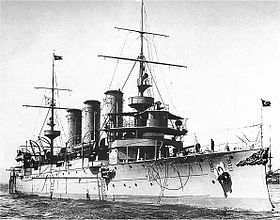 The Turkish cruiser Hamidiye
Historically the Turks tried this but the Greeks refused to be taken in - despite the public outcry at the depredations of the Turkish cruiser. The Hamidiye became something of a celebrity as a result of its daring escapades and this formed the sole highlight of an otherwise miserable Balkan War for the Turkish navy.

The scenario then will assume that the Greeks have fallen for the bait and so the Georgios Averoff will start the action in hot pursuit of the smaller Hamidiye. The Turkish vessel will be attempting to rejoin the rest of the fleet but there will be a little twist in the tale. Historically whilst the Hamidiye was on its rampage the Greeks had beefed up their coastal patrols using the old battleships: Hydra, Spetsai and Psara. Quite how they expected to catch her was anybodies guess as they were probably around 7 or 8 knots slower - but, should their paths happen to cross then maybe, just maybe they would be able to hopefully slow the Turk in some fashion to enable her to finished at leisure

By sheer coincidence (and some further manipulation of history) the Turkish line of retreat for their heroic cruiser runs parallel to the Greek battleship patrol line and so, quite by chance (and to make for an interesting game!), what began as a small affair of outposts has suddenly escalated into an action of major importance.