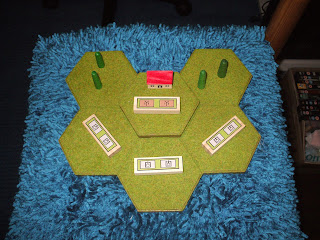 One of the things that occurred to me whilst labeling the blocks was how the symbols would show up when photographed. For the purposes of any battle reports this is quite an important consideration and so I spent a little time last night messing about with different combinations. Although the blocks themselves are a reasonable size - 63mm x 21mm x 12mm - the vehicles are probably closest to 2mm!

I also managed to complete the grey set last night so all that remains are the khaki and irregular set and they are done. The rules are virtually ready (virtually ready as in meaning some tweaking of the format and typing up a roster sheet) and so I hope, en suite ceiling and daughter's impending school trip to France notwithstanding, to try them out over the weekend.

Also assuming that this wretched cold does not get any worse!
Posted by David Crook at 05:53

...and also assuming that someone doesn't need to use the toilet underneath the seat cover in the above picture..... it is a loo seat cover right?? :o)))))

Fortunately not - it is in fact a cushion that usually has something black, white and purring loudly parked on it!