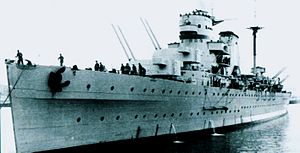 The Spanish Heavy Cruiser Canarias - similar to the British County Class - the sister ship of the Baleares
Well I didn't see that one coming! Actually that is not strictly accurate as it was one that was on the horizon to tackle at some point - the naval side of the Spanish Civil War in 1/3000th. I had overlooked this project on my earlier post as being on the 'to do' list and it only came to light when I had a tidy up of some notebooks. Contained therein was a list of the models I would need and the quantities thereof. A visit to see my grandson (who lives very close to Navwar) provided the necessary motivation and so the said models were duly acquired and are now awaiting the tender mercies of the paintbrush and the file.

I have been interested in the Spanish Civil War for a number of years, initially the land side, but as usual with many of my bright ideas it  never really took off. I acquired some models in 1/200th (for the land side) but never got very far with them and so off they went some years ago. I had also considered 20mm at one point but again nothing ever came of this. I suppose the real reason for this apparent 'no show' was probably down to being averse to having to produce both sides but this is no longer an issue as having to do this is almost obligatory for most of my ideas!

I would like to tackle the land dimension of the war at some point but in the meantime I will be happy to make use of the blocks rather than models. However, the naval side is far easier to undertake - at least in terms of the amount of material needed.

Much of the information I have for this mini project has been gleaned from Bob Cordery's 'La Ultima Cruzada' - A Wargamers Guide to the Spanish Civil War (2nd edition) coupled with my recently acquired copy of Conway's 1922 to 1946 and a few websites devoted to various aspects of the war.

As far as rules are concerned I will probably use the extension to my 1890 to 1920 set when ready and so I will have to think about getting a move on with them! Seriously though, in terms of numbers the actions I envisage will be fairly modest and so therefore ideal for solo purposes or even club night games. The big challenge will be in factoring in the human side of personal quality versus material quantity.

More to follow once I have reacquainted myself with the Spanish Civil War part of my library!
Posted by David Crook at 21:44

And now you have an excuse for some Condor Legion units!

Not forgetting Operation URSULA - the top secret deployment of some U boats to the Med.

Lots of potential for some small scale actions and I have the merchantmen for convoys etc.