Not much time for anything remotely interesting today due to the ongoing job search and some 1:1 scale painting of the shed variety! I did snatch an hour or so though to mess about with the selection of assorted woodwork on display in yesterday's post. The idea is to be able to use a number of standard pieces to be able to produce a variety of simple ship models on an as needed basis. My initial experiments are for the pre dreadnought era but the technique could easily be used for other periods with a little forethought and planning.

The two models depicted are not assembled in any way and are by no means the finished article but serve to illustrate the concept. First of all we have a battleship inspired by the King Edward VII class. 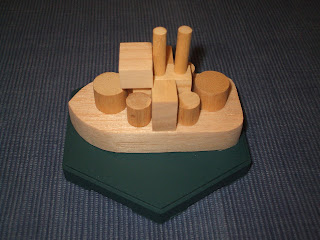 At the moment I only have 3/4" and 1/2" dowel sections for turrets - when available I shall use 1" diameter for turrets mounting 11" guns or larger. Obviously the turrets will also need to have some gun barrels added as well! The bridge is way too heavy and I will also trim the rear quarters of the hull. The Hexon tile is shown to illustrate how she fits. The superstructure is made up of trimmed blocks. 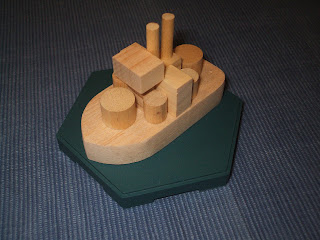 Another view of the King Edward VII 'concept' model

I also messed around with what would be a standard type of battleship and is modeled on HMS Canopus. The model has a central box type battery which is easily represented by a couple of blocks and would therefore be very suitable for 'mass production'. 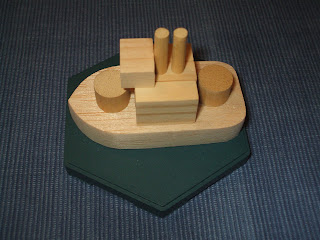 I am not at this stage intending to model specific types as generic is very much the order of the day. I am intending using three hull sizes and three turret sizes although aside from the circular variety I will also have the option of using some square types as well. 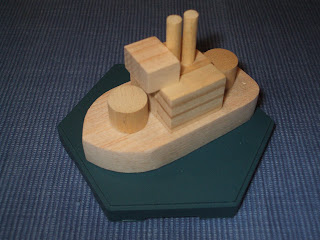 Another of the 'HMS Canopus' type battleship mock up - obviously the bridge is not the finished article and the small matter of gun barrels needs some urgent attention!

Where exactly is this heading? Well to be honest I am really not sure at this stage but I was so intrigued by the idea that I simply had to try it out for myself. To be honest, I am sold on the concept in a big way and not only for this period of naval history but for a number of others.

My conscience has nagged me incessantly about my ACW project of last year and whilst I have built a number of models for this they are not built in the same way. This will be one to ponder - along with some ships for the Napoleonic Wars, the Armada, 16th century galleys; not to mention some ancient triremes....;-)
Posted by David Crook at 20:21

These are even better than I expected!

Have you also thought of using blocks for turrets rather than dowels as they will be easier to drill into?

They do look good, but it sounds like you're having trouble asking your own question - can you tell which of these ships it is?

I have to say, that's rather reminiscent of Bob's ships. Which is by no means a bad thing of course. Certainly fits your tile snugly: if this is King Edward VII/Canopus, will armored cruisers or later battleships be overlapping the tiles a bit ?

Nice idea about the standardization of parts, you should be able to bang out some fleets in no time.

I look forward to seeing further evolution of your concept.

Many thanks for the generous comments - much appreciated!

Its funny, seeing the models first hand, even in a mock up form, has really sold me on the concept! I certainly intend using square/rectangular turrets as required but what I want to to do now is think about guns merely behind shields or even none at all.

I shall continue to mess about with the bits and pieces and see what else comes out in the wash.

Just kicking around with conceptual stuff at the moment so who knows what the final form will morph into!?

Wooden blocks are the new Lego!

All the models for this idea will range between 3 1/4" to 3 3/4" in length and 1 1/4" to 1 3/4" width. The hull depth will range from 3/4" down to 1/4". The models are intended to be representative of types and to be used without too much difficulty with 15mm figures. They will be compressed horizontally and exaggerated vertically.

The idea was Bob's originally and so if the models bring those in mind then I guess I have cracked it!

I tried to see if a dreadnought era ship could be made on the same basis but it did not really work - simply because having too many similar sized turrets eats into the available 4" too much. It will be pre dread and earlier only at this stage.

Have you gotten any games in with the ACW chaps yet?

I managed a few solo test games with the completed ironclads but at the time of writing fully two thirds of the collection is unpainted (not to mention with a couple suffering cat related damage!