I have been to....Skirmish at Sidcup Grammar School

Today has been a really good day. To begin with, the weather has been absolutely glorious; I have been to Skirmish in Sidcup and I spent a very pleasant afternoon wandering along the local river bank with the family (the tide was in and lots of small craft were in evidence) to feed the local water wildlife with my grandson. All this followed by a very nice roast chicken dinner - it doesn't get a lot better than this!

Skirmish in Sidcup is a delightful show to go to with a very nice balance of games and traders and of a size that is not like an assault course to negotiate. A couple of games caught my eye including a 1/3000th WW2 Java Sea battle fought using General Quarters and a very nice Gladiatorial Combat game using a set of rules using dominoes and available from the Society of Ancients. The terrain was cleverly done using Heroscape tiles and the columns from a wedding cake! There was also an interesting looking French and Indian War skirmish and a  WW1 action with some really stunning looking trench works. 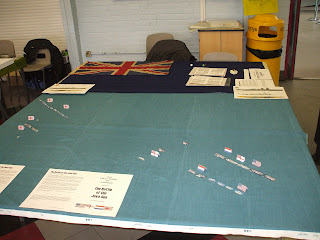 Java Sea WW2 - Japan versus just about everybody else! 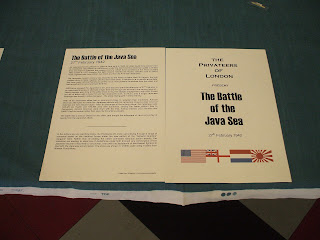 Very well organised by the Privateers of London - cheers chaps! 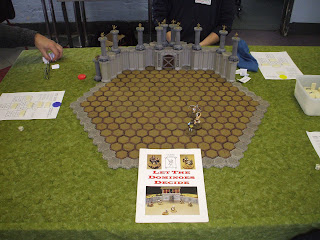 Gladiators having a pizza the action - Dominoes, get it?

I was also delighted to catch up with Bob Cordery for a chat and an exchange of goodies - I am now the proud owner of another five boxes of blocks and some very nice additions to the library including a Conway's Battleships of the World 1906 to the Present Day. Many thanks Bob - you can rest assured that this will be put to very good use! We caught up on a number of ideas relating to cartoon ships, working with wood and finished up with the stated intention of getting a game in at some point which I shall certainly look forward to. 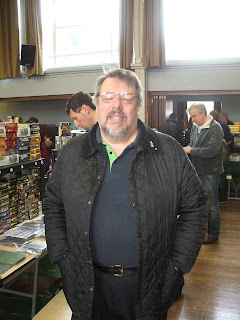 Bob 'No I am not scratchbuilding the fleets for Tsushima in wood' Cordery striking a reflective pose.

I also made the acquaintance of a number of legendary bloggers including the renowned Angry Lurker; the head of the Posties Rejects and also Big Lee (and yes he is rather large as well....!). We discussed much of importance in the world of war games, not least of which the various nefarious means employed to get new purchases into the house without the respective SWMBOs knowledge - I am sure there must be megagame in there somewhere....;-) We also agreed that blogging is definitely a good thing and also how much it has enhanced our enjoyment of the hobby - especially in the 'finishing projects' stakes. 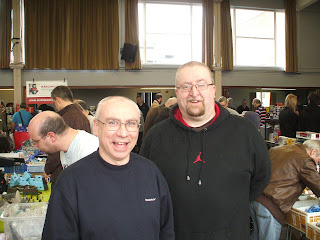 The Angry Postie and the Lurking Reject - thoroughly decent chaps and it was a pleasure meeting them at last - also Big Lee although I could not fit him in the picture without standing somewhere over the river in Essex....;-)

On the subject of new acquisitions I had a very rewarding day and even better, a very cheap one. I managed to score a copy of the Encyclopedia of Cruisers of World War 2 by M.J. Whiteley for a fiver, a box of 54mm Armies in Plastic NW Frontier British Infantry and four 54mm cannons. The cannons came from a traders rummage box and cost the princely sum of 25p each - I was very pleased by this although Bob rather disdainfully observed that they didn't fire....;-) 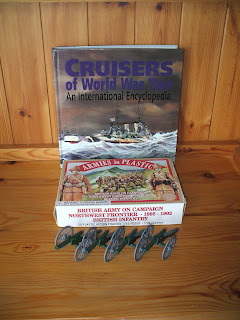 Some of the new acquisitions for the collection - note the £1 artillery park!

All in all then, it has been a fantastic day all round, more so as this is my first week of unemployment and so anything good and positive is most gratefully received. The final picture of the day was taken when we were on our walk along the river - I am not sure of the origins of this particular vessel but as I watched it beating upstream I found my mind's eye for some unaccountable reason thinking back to the opening scene from Saving Private Ryan.... 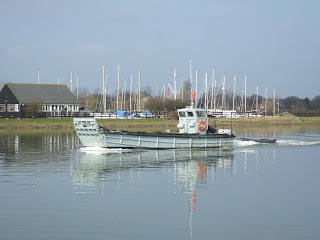 It was good to meet you and Bob at skirmish. One of the things I like most about blogging my hobby is the chance to meet and exchange ideas (and schemes for outwitting the SWMBO).

And you sir! The ongoing battle with the respective SWMBOs (God bless em'!)can best be likened to trench warfare with the odd small raid succeeding but the big push making absolutely no progress!

How do you find FOW?

It would be so nice to meet fellow bloggers in the flesh! Sidcup sadly is a fair way away from the frozen North of England.

I was interested to see the Battle of the Java Sea game (I gamed that last year and it's a tough one for the ABTA). How did it plan out? I noticed a thin RN destroyer screen out front which should have at least given ABTA slightly more thinking time than their historical counterparts. Gawd bless those WWI American destroyers if they tried to "pitch in".

I thought you would like the Java Sea action! Sadly I did not see the end of the action other than to tell you that General Quarters 2 were the rules of choice.

It was a great day and I thoroughly enjoyed myself!

Good stuff - I have a few of those guns myself. They are BMC guns.

Looks like a cracker day out (company not withstanding!) and I am getting very jealous of your impressive collection of Conways!!!!

I did wonder if they were BMC so thanks for the confirmation. A couple of these will form the artillery park for the NW Frontier Afghans.

It was one of those all round great days and meeting fellow bloggers is always a pleasure although I think we still hold the record for the longest distance connection!

The experience was a mutual one and I am very pleased that you took your duties as the custodian of Postie's wallet so seriously....;-)

Looks like a good show and a great place to meet fellow gamers/bloggers.

I agree about the river craft. I've seen them used as fishing boats for hauling lobster or crab pots and the ferry across the Hamble near my dad's place is very similar.

It was a very cosy affair which had a very chilled vibe about it. It was a good chance to catch up with old friends and to make a few new ones.

I was pleased to see the 'landing craft' and the weather was really nice as well so all in all it was a very nice day.