Side (pronounced See-Day) was the nearest town to where we were staying during our recent Turkish adventure and whilst it is a fairly modestly sized place it has a full and interesting history. Further details can be found here - Side


We decided to travel there for a visit and rather than using the local Dolmus (a local bus service based on minibus sized vehicles) instead opted to use the sea and travel by boat. The seas around Side are awash with tourist boats based on the traditional Turkish Gulet and decked out to look like stylised pirate ships. The Gulet itself looks something like this: A selection of Gulets

The tourist version, complete with imitation sails, cannon and usually some crew members looking like a vague approximation of Captain Jack Sparrow look more like the image below so you can see the origins of design.

I should point out that some of the larger examples we saw were triple decked and given the relatively shallow draft of the basic design one would have to wonder how they would cope in any kind of a sea as the centre of gravity would be pretty high! Our own transport for the day was a fairly modest vessel and is pictured below in Side harbour, just along from the Temple of Apollo.

After a short cruise (around 45 minutes we arrived at the small harbour at Side and overlooking the same was the famous ruins of the temple of Apollo. Before we headed off to have a look around we passed a number of bars and small shops located around a central square in which featured a statue of Mustafa Kemal Ataturk - the founder of the modern Turkish republic (see Mustafa Kemal Ataturk). 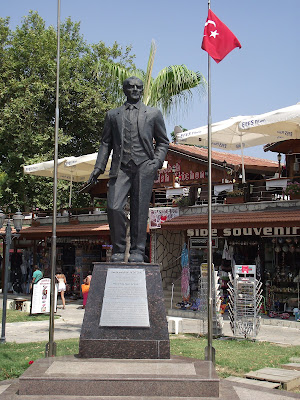 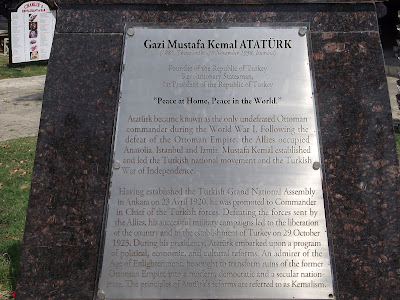 The inscription on the base of the statue.

It was a short walk from the square to the ruins of the temple of Apollo which must have been a very impressive structure in its heyday - especially when viewed from the sea. 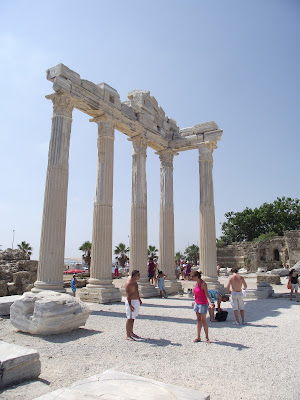 The remains of the entrance.... 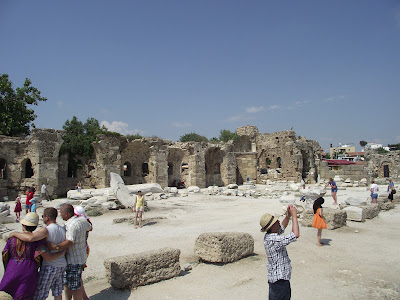 ....and the surrounding buildings (the columns were behind me for this shot). 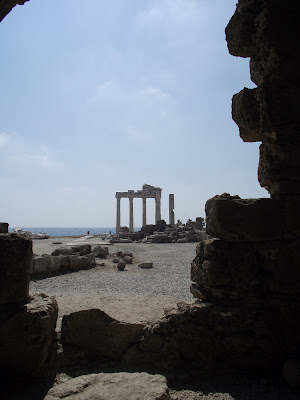 This was my 'artistic' shot! I took rather a lot more pictures of the temple but the above will give a good idea of what it was like.

After having a look around the site we headed into the town for the short walk to the remains of the 15,000 seater amphitheatre still used for musical evenings to this day.

The heat was beginning to tell (it was 45 degrees in the shade) so we had a couple of drink stops en route and looked in some of the souvenir shops for presents. Sadly no buildings but the effects of the air conditioning was most welcome!

There was a small shady square by the amphitheatre and so SWMBO and Holly opted to take advantage of the greenery whilst I tackled, Indiana Jones style, the climb to the top of the amphitheatre. The view was quite simply, stunning. 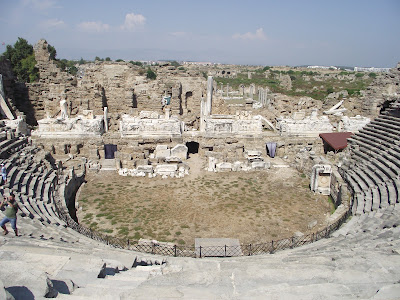 From the top looking down.... 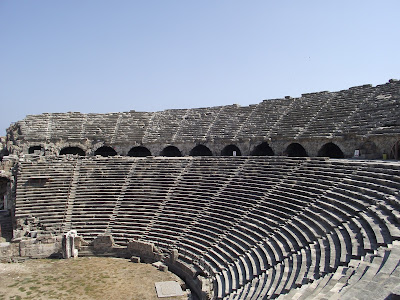 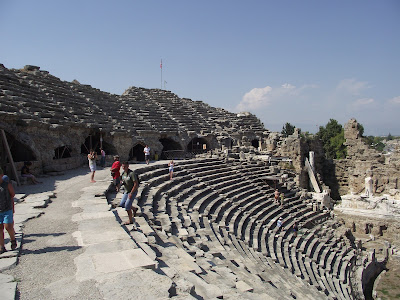 The town itself was full of old Ottoman style buildings that had, for the most part, been turned into souvenir shops but they still retained plenty of character. The mosque was a quite charming looking building with a single minaret but with some quite beautiful tile work in the courtyard in the area designated for the completion of the required ablutions before prayer.

I would dearly have liked to have photographed this but was unsure if this would have been permitted and so erred on the side of caution and kept the camera switched off.

So, after a couple of hours baking in the heat we headed back to the boat for some refreshments and the welcome sea breeze for the short cruise back. The final shot was taken from the sea as we headed home and captures the sheer history of the area from ancient through to medieval times and with the statue of Mustafa Kemal Ataturk bringing the story of a couple of thousand years or so up to date.

The temple of Apollo with the town of Side to the rear - note the mosque and the Taurus mountains in the background.

It was an exhausting but rewarding visit and so arriving back at our hotel for a shower and dinner - together with the odd chilled libation - was a very welcome end to the day.

Side sounds like it was a very interesting place to visit.

I look forward to reading Part 2!

It was a quite charming place to visit although not of specific military interest. I just love wandering around ancient ruins in the Eastern Med!

It was certainly a very atmospheric place and one I found to be quite inspiring.

The whole pirates theme was very evident in the make up of the tourist cruising boats plying their trade along the coast. Virtually every one we saw featured an obligatory Captain Jack Sparrow!