Somewhere over Russia, 1942 - The Italian Job

It was a busy night at the club last night with yours truly putting in a shift for the first time in ages. Mr Fox had once again arrived with his large box of Axis and Allies: Angels 20 aircraft and so we took to the skies for a rather unusual game set on the Russian front circa. 1942. Unusual in that it featured Italians versus Russians for a change. 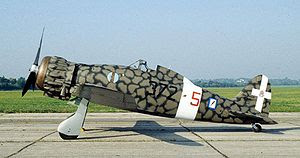 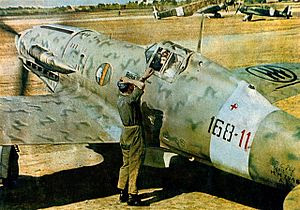 The Italian fielded three Macchi C.202 Folgore and a pair of earlier Macchi C.200 Saetta whilst the Russians made use of a pair of Polikarpov I-16 "Ishak", a lend lease P40 and three Yak 1s. Points wise it came out at 148 to 150. The Italians were under the tender mercies of Mr Fox and yours truly whilst the red horde were driven by the two Steves and young Brad. 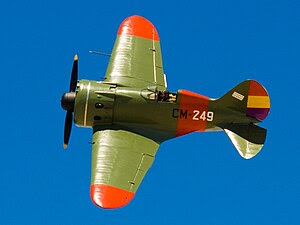 The Italians, with the communication skills for which they are justly renowned, (usually involving much shouting and gesticulation) immediately split into two groups so that the poorer C.200s could take on two thirds of the Soviet air force comprising the Yaks and the P40 whilst the three formation flying C.202s watched the lurking and very dangerous I-16s. Both of them.

Fighting I-16s is an art form all of its own as they are nimble, quite rugged and cannot be ignored (they are like flying terriers) but they are s-l-o-w.  Mr Fox and the pair of C.200s was soon in trouble, both qualitatively and quantitatively and were downed in fairly short order despite making a real fist of attempting to stay in the air. Meanwhile one of the C.202 roared over in support (much too late I might add as by this point one of the C.200 was shot down and the other was crippled and trailing smoke, Italian swear words and no doubt vast quantities of Chianti in equal measure) and calmly slotted onto the tail of the P40. The firing was spectacular to say the least with an obscene number of 6s in evidence and so the lend lease machine exploded in a cloud of metallic debris.

The remaining C.202s had managed to cripple both the I16s and eventually downed them both but it took far longer than it should have and hastened the messy end of the the pair of C.200s.

Time was getting on and so we called it day with the Fascists securing the honours.

In retrospect what should have happened is that the two C.200s may have been better advised tackling the I16s whilst the C.202s handled the rest. Although both I16s were downed it took far too long and so hastened the demise of the C.200s, engaged as they were in a very unequal fight.

As ever, many thanks to Mr Fox for the idea and the toys and to the two Steves and young Brad for a very enjoyable and challenging game.
Posted by David Crook at 06:31