Despite feeling dreadful for most of the day with this wretched cold/sore throat/chesty cough I rallied sufficiently this afternoon to tackle a small action based on the Balkan  war of 1912. As per usual, the block armies were out to play with my Hexon terrain as usual providing the backdrop. I kept the number of units down to quite a small level as I was unsure as to how long my concentration would last for! The rules were an earlier version of Bob Cordery's Memoir of Battle 19th century set but with a couple of house rules thrown in - one of which raised a point for further consideration, more of which later.

The Bulgarian advance continues as the Turkish front line is breached in several places. A small but vital crossroads, running through a ramshackle village, lies along the line of advance of the leading Bulgarian corps and if captured would allow the next Turkish position to be speedily outflanked. A force has been hastily assembled to take the crossroads and village - known locally as Dort Kollari - and comprises the following:

Despite the magnitude of both the losses in men and material the Turks had thus far sustained fighting the Bulgarians they were able to rapidly identify the threat posed by losing this position and so a force was detached from the main army in order to defend the village whilst their shattered armies regrouped and reformed in the rear. The Turks were outnumbered for sure but were able to quickly entrench a number of key positions on the outskirts of the village and there nervously awaited the Bulgarian assault. 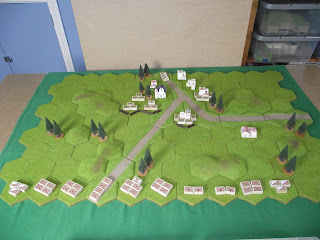 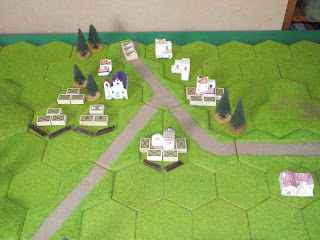 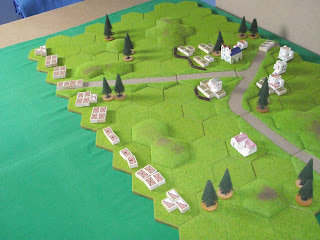 The Bulgarians prepare to attack 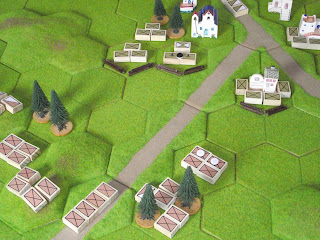 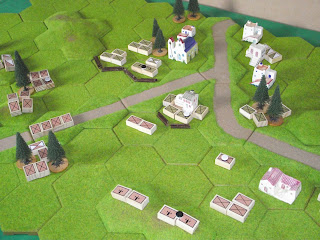 The Bulgarians continue their advance taking casualties as they do whilst their artillery deploys on the hill in the foreground. The leading Bulgarian infantry unit is already locked in combat with the Turks in the centre, despite their earlier losses. 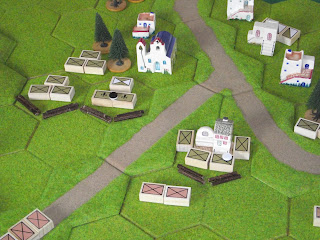 Although seemingly engaging the Turks on the own the leading Bulgarian infantry unit can at last see the support beginning to arrive. Will it be in time? 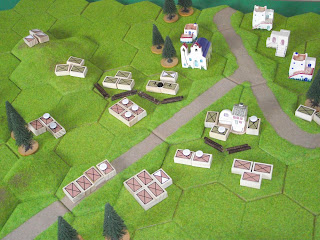 A murderous exchange of close range rifle fire leaves the Bulgarian infantry dashed against the Turkish positions. Ignoring the Bulgarian cavalry (admittedly out of sight on the other side of the hill) even the Redif unit of the extreme left moved out to engage the hated Bulgarians. 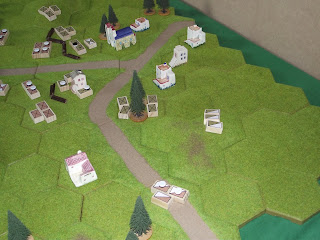 With some final exchanges of rifle and artillery fire the Bulgarians reach their exhaustion level and so fall back to regroup and await the rest of the army in order to renew the assault. With a final flourish the Turkish cavalry chase their Bulgarian counterparts off the hill. The Turks had held on! 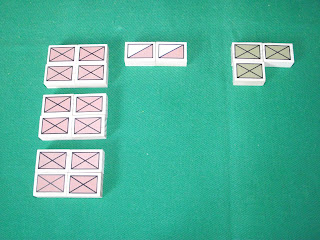 The losses for each side 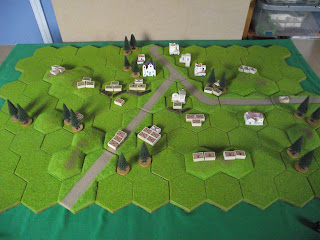 The final positions at the end of the action

Phew! It was a short and sharp action and great fun to play. The rifle fire was very effective and the Bulgarians arrived at the Turkish fieldworks both uncoordinated and badly cut up. Numbers would have prevailed eventually but they need to be at the right place and at the right time and the Bulgarians simply did not manage this. They arrived piecemeal and were made a meal of in pieces. The artillery would have been effective had it gotten into action sooner but the Bulgarians had gambled on the speed of their assault carrying them through as it had done so many times previously.

The rules worked very well although I am unsure about the ranges. When my head is clearer I will think about this further but I am leaning towards a 3 hex maximum for all firearms but with adjusted effects for range and quality of weapon being used. As I say, I will need to give this some further thought once the drugs kick in.

I am now convinced that Bob's idea of plus or minus a strength point for good or poor units is the right way to go as the effects of battlefield durability based on quality work very well using this idea.

All in all then, it was a pleasant way to spend an hour or so.

A very interesting and exciting battle report ... and your photographs give further proof that blocks can look just as good as painted figures.

I look forward to reading further reports when you are feeling better.

It was a simple game to set up with plenty of carnage and despite their losses the Bulgarians were very close to breaking into the Turkish defences. Taking such a defensive position 'on the run' requires a certain degree of coordination and if that is not there then the result will usually be an expensive failure.

It followed the general pattern of the actions that were typical of the war so the 'feel' was just right and so proved to be a welcome tonic for my cold infused spirit!

Interesting aar. It is quite doubtful that Turks and Bulgarians (vs. Greeks, for example) actually hate each other that much. :)

Bulgarians heavily depended on their superiour artillery (superiour in performance, that is to say), so deployed it aggressively. However, there numerous reports confirming willingness to attach fortified positions en masse. And did suffer heavy casualties for it, too. So, your battle result is not unreasonable historically speaking. :)
Cheers,
Krum

The scenario was around the attackers making what would probably be called a 'hasty' attack in modern parlance and so the artillery was not really able to influence events as well as it might.

I was pleased that for me the action 'felt' right in terms of the overall outcome and I am also pleased that you enjoyed it!

'Hated' is perhaps a little on the strong side!